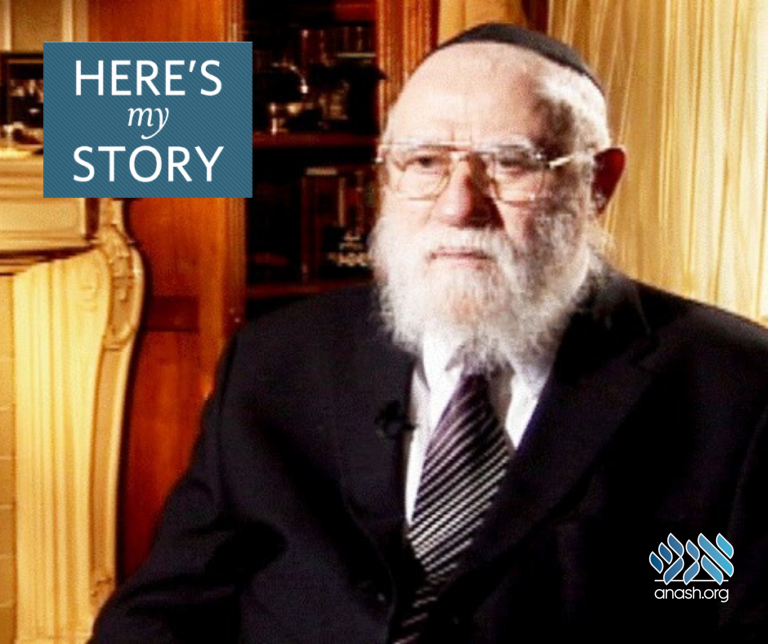 Here’s My Story: Rabbi Chaim Ciment shares a few stories he heard from Rabbi Yoseph Ber Soloveitchik about his days together with the Rebbe in Berlin, and how he knew that the Rebbe would one day become Rebbe.

Since 1954, I have served as the Rebbe’s emissary in Boston, and this is where I met Rabbi Yosef Ber Soloveitchik from whose lips I heard the story I am about to relate.

Rabbi Soloveitchik – who for many years headed RIETS, the rabbinic school of Yeshiva University – had studied at the University of Berlin in the late 1920s and early 1930s together with the Rebbe. But in 1932, he immigrated to America and settled in Boston. Even after he became the rosh yeshivah of RIETS, he continued to be involved in the Boston Jewish community, and because of that, I invited him to participate in a local Chabad celebration in 1983.

That year, the Rebbe was campaigning for communal Torah scrolls to be written on behalf of the Jewish people, and the yeshivah which I managed – Yeshivas Achei Temimim – signed on to participate. I launched a publicity campaign to make the community aware of the project and to get as many Jews as possible to sponsor letters in the Torah scroll. When the scroll was finished, we planned a big celebration, booking a hall at the Statler Hotel, one of the largest hotels in Boston, in anticipation of a huge crowd, and we even got The Boston Globe to cover the event.

I hoped that Rabbi Soloveitchik would join the event, so I went – together with our rosh yeshivah, Rabbi Chaim Wolosow – to invite him, and I took that opportunity to ask him about his years in Berlin with the Rebbe.

Those were the very words he used. And I would just like to point out that Rabbi Soloveitchik was not prone to exaggeration. He was not an excitable person – he spoke calmly, in a straightforward manner – so this was plainly how he saw it.

Rabbi Soloveitchik then went on to describe the Rebbe in Berlin when he was a young man and nobody suspected that twenty years hence he would become the Rebbe. “The only thing on his mind was Torah,” Rabbi Soloveitchik said, “and he was also most scrupulous about immersing daily in the mikvah. He somehow managed to get a hold of the key to the building so he could immerse every morning.” To do this was most unusual in Berlin, where no one observed this custom.

“Wherever he went, he had a Torah book with him,” Rabbi Soloveitchik continued. “And even when he was in class, during a lecture given by a professor, he would sometimes open up the book and study.

“On one occasion, the professor saw what he was doing and assumed he wasn’t listening. So the professor decided to call him out and embarrass him in front of the class: ‘Schneerson – maybe you could repeat what I just said?’

“The Rebbe stood up and started to repeat the lecture, word for word. And, from that time on, the professor never bothered him again.”

Rabbi Soloveitchik then went on to relate a particularly fascinating incident which occurred on Purim. After partaking in the holiday feast, the Rebbe walked out to see that a lot of students were milling about, so he got up on a chair and started to speak about the meaning of Purim. Undoubtedly, he was trying to reach the Jewish students – of whom there were many – by explaining the story of Purim and the mitzvot of the day.

But Berlin was not the place to do this. Berlin was a place that had many laws, one of which forbade preaching in public without a license. As the Rebbe was standing on a chair and talking, the police arrived and arrested him.

Since Rabbi Soloveitchik was known as the Rebbe’s colleague, he was summoned to the police station to vouch for him. He obliged, explaining to the police that the Rebbe was just celebrating the Jewish holiday of Purim and meant no harm. The police accepted his explanation and let the Rebbe go.

As they left the police station, Rabbi Soloveitchik told me he said to the Rebbe – who was then the son-in-law of the Rebbe and not yet, as I mentioned, Rebbe himself – “You know, one day you are going to be a Rebbe … Your ancestor [the Alter Rebbe and founder of the Chabad Movement] was in prison, and your father-in-law was in prison, and now you were in prison. It’s a sign.”

In the end, Rabbi Soloveitchik never made it to the celebration, but the story he told me remained with me long after that memory faded.

Rabbi Chaim Ciment has served as the Rebbe’s emissary in Boston for the past sixty-six years and is presently the executive director of Yeshivas Achei Temimim, He was interviewed in June of 2007 and again in January of 2008. Click here to download a full-colored PDF version.