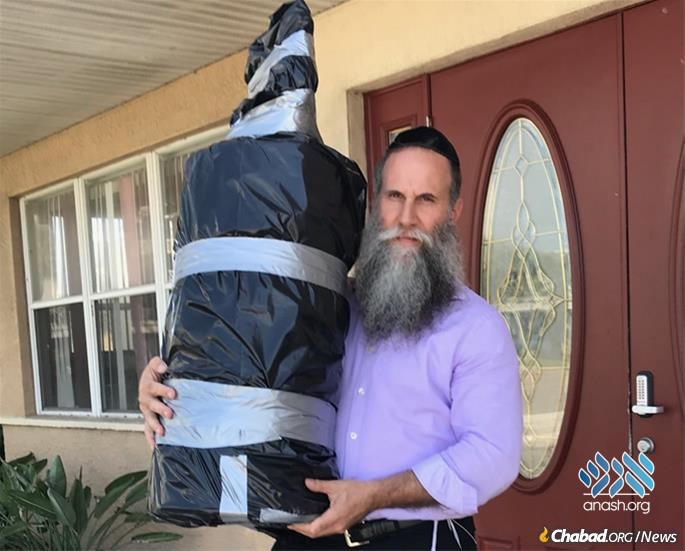 On Chabad of Palm Coast’s weekly Facebook post late last week, along with the Shabbatcandle-lighting time associated with Daytona Beach, Fla., was a one-line addition that read “Stay safe this week!”

That’s a sentiment being expressed in Florida, Georgia and the Carolinas as Hurricane Dorian, a Category 5 storm with wind gusts in excess of 180 miles, threatens the southeastern coast of the United States. The unpredictable nature of this particular storm, which as of midday on Sunday was battering the Bahamas, is making it hard for forecasters to say with certainty where it will hit next.

Several areas in Florida, including Palm Beach, Brevard and Martin counties, have issued mandatory evacuations, especially for low-lying areas and barrier islands, such as Satellite Beach, where Chabad of the Space & Treasure Coasts is located.

According to Rabbi Tzvi Konikov, co-director of Chabad in Brevard County with his wife, Shulamit, people have been preparing for the storm for several days—boarding up homes, packing up essential items and stocking up on supplies.

“We have had volunteers who have offered to help people board up their homes,” said Konikov. “We’ve been involved in helping with all sorts of requests from people who need sandbags.”

“During shul yesterday, just before the kiddush, someone got up and mentioned that he has extra sandbags if anyone needs them,” he said. “People are sharing and offering assistance. It has been a real community effort.”

Shortages of sandbags, water and generators have been widely reported. In fact, when the rabbi learned that a shipment of generators was arriving at a local home-improvement store, he ran over to buy two of them, knowing that there would undoubtedly be someone he knew who would need them.

Konikov happened to mention his purchase to a woman in the community, not knowing that she had been desperately trying to get a generator for a family member who needs to keep the electricity going in his home, as he is ill and requires help breathing.

“I delivered the generator to this woman, and she was in tears,” related Konikov. “She said, ‘You literally have saved my stepfather’s life.’ ”

The rabbi, who has gotten accustomed to battening down the hatches as major seasonal hurricanes have threatened or struck their area in the past few years, assured that arrangements had been made for the Chabad House’s three Torah scrolls to be moved off the barrier island and onto the Florida mainland for safekeeping during the storm.

Concern About the Elderly

Further to the south in Boca Raton, Fla., Ahuva and Rabbi Ruvi New, co-directors of Chabad of East Boca, spent part of Friday reaching out to people who needed help preparing for Dorian, even as its track remained unknown. “We fielded numerous calls from people from out of town concerned about elderly relatives who are alone,” said the rabbi. “So we dispatched volunteers to purchase food, water, flashlights and other supplies for some of them.”

This was also the first Shabbat that their East Boca community had an operational eruv, a border surrounding the neighborhood, often made of string, that allows people to carry and transport certain items on Shabbat. The rabbi noted that they have a “dedicated crew of volunteers who will address any issues of damage [to the eruv], should there be any.”

He explained that “we’ve been through many of these over the past 20 years—long enough to know that hurricane paths are very unpredictable until they approach the coast. So aside from stocking up on water and food staples, we’re adopting a wait-and-see approach for now. We, together with all the shluchim in Florida, feel very secure and assured by the Rebbe’s brachos [blessings] and koichois [strength].”

Meanwhile, at the Tabacinic Lubavitch Chabad Jewish Student Center at the University of Florida, the emissaries there are once again reminding students to listen to the weather forecasts and be prepared.

In a message to students and community members, Chabad emissaries Rabbi Berl and Chanie Goldman, and Rabbi Aharon Chaim and Pessie Notik wrote, “As Hurricane Dorian approaches, its path still remains unclear, and there’s a lot of uncertainty. This post is out of an abundance of caution. We must hope, pray and ask Almighty G‑d to keep the hurricane out at sea and that ALL in the path of the storm will be safe and unharmed. … We urge everyone to stay informed, take this seriously and be prepared. Please take all of the necessary precautions, including securing your dorm/apartment/home; taking in outdoor furniture and objects; and stocking up on water, food and essentials, including flashlights and batteries.”

They ended their message by saying “If you know of ANYONE—community members, elderly persons, students etc.—who live alone in a house, apartment etc., please let us know by Sunday. “We will make contact with them and offer to pick them up and bring to Chabad for food, shelter and companionship during the storm. NO ONE should be alone during a hurricane or tropical storm.”