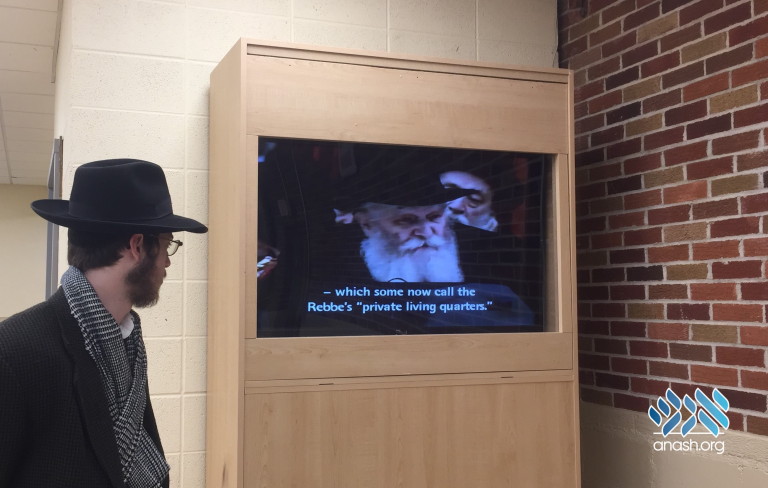 By the Talmidim Hashluchim of Yeshiva Gedolah Postville

After months of waiting, the Yeshiva of Postville has finally acquired a new state-of-the-art screen for showing videos of the Rebbe, which has since been updated with approximately 100 hours of footage.

The idea was born at a small farbrengen on Chamisha Asar B’Shevat, where a few Bochurim sat together with the Shluchim of the Yeshiva Gedolah. At the Farbrengen, a resolution was taken to raise money and buy a screen that would continually play videos of the Rebbe. Bochurim at the Farbrengen each pledged amounts of money and the rest was raised shortly after.

The Bochurim worked long hours to build a beautiful box to house the new screen, which has been installed in a side corner of the yeshiva’s dining room.

The Yeshiva Gedolah Shluchim meticulously selected, edited and organized tens of hours of film, including Sichos, Farbrengens, Tefilos, distributions of dollars, Rallies, Parades and many other events with the Rebbe, which now play continually on the screen, 24 hours a day.

Boruch Hashem, the effort has been a marvelous success. Bochurim and sometimes Anash can constantly be found sitting near the screen, deeply engrossed in watching the Rebbe Davening, delivering a Sicha, etc.

Several Yeshivos have since contacted us for more information and assistance in how to implement this wonderful idea in their respective locations. We strongly recommend any Yeshivos, Chabad houses, etc. to follow suit.

We conclude with the fervent hope and Tefilah, that Hashem has mercy on us and grant us the privilege of seeing and hearing the Rebbe in person, immediately, Amen.