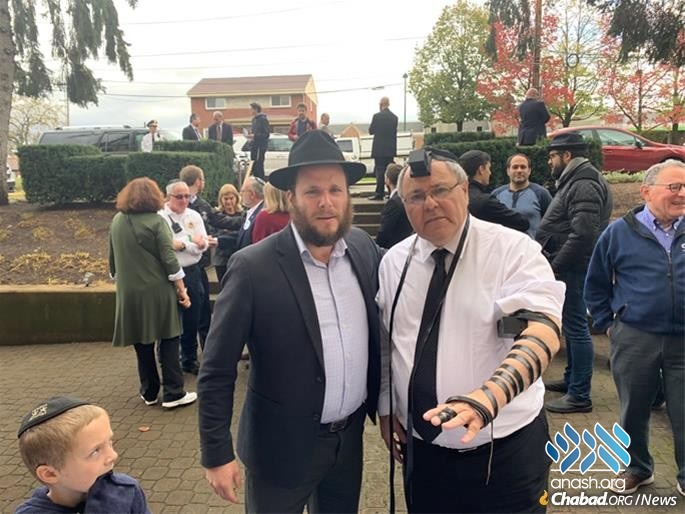 Anthony Fienberg could think of no better way to honor his slain mother, Joyce Fienberg, and the 10 other victims of the Tree of Life massacre in Pittsburgh on its one-year anniversary than to invite the public to lay tefillin on the institution’s grounds.

Aided by local Chabad-Lubavitch emissaries, rabbinical students from the nearby yeshivah and volunteers from the community, Fienberg staffed a table on Sunday that included the opportunity for passersby to engage in a mitzvah that Jewish thought teaches has the power to bring fear upon Jewish enemies and bring light to the world.

From the hours of 9 a.m. to 3 p.m., against the backdrop of impromptu sermons, candle-lightings, vigils and flower placings throughout the day, Fienberg and the volunteers churned out wrappings for a crowd eager to do the mitzvah.

“What was unique about the experience was that usually you have to convince people to do the mitzvah,” Rabbi Chezky Rosenfeld, director of operations at the nearby Yeshiva Schools of Pittsburgh, who helped organize the event, told Chabad.org. “But in honor of the victims, people were gravitating to us, asking to do the mitzvah.”

He himself helped about 15 people wrap tefillin during a two-hour shift, and the numbers remained steady throughout the day, he said.

Participants included other relatives of the victims besides Fienberg and dignitaries who were in Pittsburgh for the commemorations, including Consul General of Israel in New York Dani Dayan.

Fienberg, a retired research specialist at the Learning Research and Development Center at the University of Pittsburgh, perished at 75 years of age, along with the 10 other victims at the hand of the alleged perpetrator, 47-year-old Robert Bowers, who burst into the synagogue during Shabbat-morning services Oct. 27, 2018, firing a semi-automatic weapon and yelling anti-Semitic epithets.

The incident stands as the deadliest in U.S. history in the Jewish community.

Fienberg’s son, who had gotten to know the Pittsburgh Chabad during his grievous trial of the past year, flew in for the yahrzeit (anniversary of passing) of his mother from his home in France.

The center where she worked paid tribute to Fienberg on its Facebook page in the aftermath of the slayings, describing her as a “cherished friend” and “an engaging, elegant and warm person.”