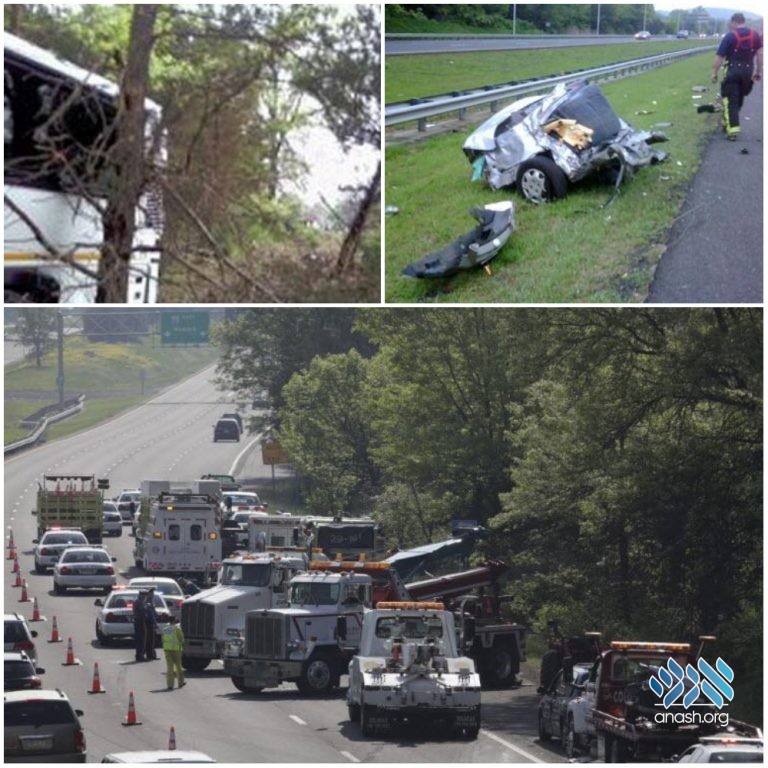 The Lubavitch community of Pittsburgh is celebrating the 10th anniversary of the miracles they experienced while on their way to participate in the first Great Parade in Crown Heights.

A few weeks before Lag B’Omer 5770, the Lubavitch community of Pittsburgh decided to hire coach buses to partake in the first Great Parade in Crown Heights after many years of quiet parades.

On Motzei Shabbos, the night of Lag B’Omer, about 80 men, women and children, boarded the two buses that would take them to Crown Heights. They drove together, with the men’s bus leading in front of the women’s bus. The bus drove throughout the night to New York.

While driving on the I-78, near the Morristown exit at around 5:30 A.M., the first bus driver saw a small car driving straight towards the bus, the wrong way! In an effort to avoid a head-on collision, the driver veered toward the right side of the road. Seconds later, the car crashed into the left side of the first bus. Another car behind the bus wasn’t able to stop in time, and crashed into the bus.

SMASH! The men on the bus woke up. They felt the bus driving slowly through the trees on the side of the road. After a few moments, the bus finally stopped up against a tree. For a few minutes there was total chaos on the bus. Thankfully, a few of the adults on the bus took control. One of the window emergency exits was opened, for everyone to leave from.

Miraculously, a state trooper had been driving not too far behind the bus. He immediately radioed for backup, ambulances and fire trucks, being able to identify the exact location in just a few moments. He was on the scene assisting within seconds, and helped people jump off the bus through the window emergency exit.

The women on the second bus frantically called their family members who were on the crashed bus, but could not get through. The phones on the bus had flown all over, or people who just too preoccupied to answer their phones. The women at first feared for the worst. However, after a few minutes they were amazed to see the men come off the bus, safe and sound.

In the next few minutes, tens of emergency vehicles filled the highway around the crash. Helicopters circled overhead. It was thought there would be ch’v many fatalities in such a crash. They were amazed to see the passengers standing on the side of the highway, dazed, some with minor cuts, but alive and well. Miraculously, only one person was seriously hurt. An ambulance took the one injured person to the hospital.

After a long wait, the second bus, packed to capacity drove to a mall at the nearby exit, and dropped off its passengers. It then went back and picked up the remaining men and took them to the mall. The second bus then continued with its original passengers to the parade.

The men meanwhile davened Shacharis outside the mall. A replacement bus was quickly and generously organized to bring the men to parade. A bit after Shacharis, the bus came, and took the men to Crown Heights.

In the next few days, more details of the story and the extent of the miracles emerged. This is what had happened:

A man unfortunately wanted to end his life. He drove on the wrong facing side of the highway, and waited between for a big vehicle to crash into. He saw the bus, and drove head on into the bus to accomplish his goal. The bus, with part of the car under it, went into the trees.

Looking back at the incident it became clear that Hashem made many miracles on that Lag B’Omer:

Just as Hashem made miracles then, may He make the biggest miracle of all, and take us out of Golus speedily, now!