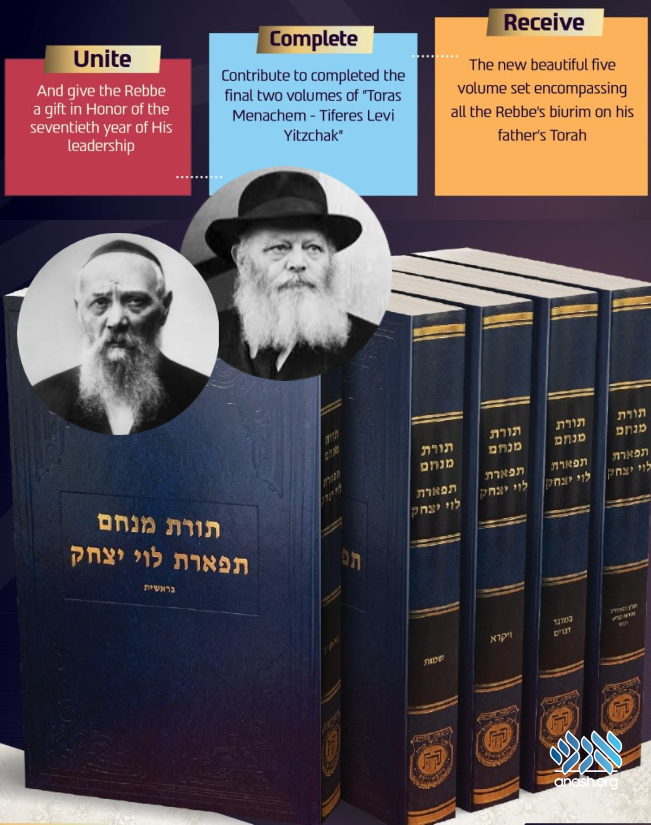 A well-known philanthropist reached out to Lahak to sponsor the new set of Toras Menachem – Tiferes Levi Yitzchak for every Shliach in his state.

On the morning of 24 Teves, in Lahak’s offices above 770, editors were adding final corrections to Toras Menachem vol. 68 when the telephone rang.

On the line was a well-known philanthropist who heard about the special sale which was announced in honor of Yud Shevat – 70 Years. As someone who has a special appreciation for the Rebbe’s Torah, and especially for the dissemination of the Rebbe’s father’s teachings, he wanted to surprise each of his state’s Shluchim with the new set, delivered directly to their home.

Lahak was happy to acquiesce, and this coming Yud Alef Nissan, the seforim will be shipped directly to each of the Shluchim’s homes.

Lahak’s popular sale is now coming to an end. Lahak’s office does emphasize, however, that if someone would like to order a large number of sets for his local Shluchim, Yeshivah bochurim or Yeshivas Kayitz campers and so on, could reach out to the offices of Lahak at the number 1-718-604-2610 or via email at info@lahak.org

For individuals interested in ordering the set of five seforim for the low price of just $30, the sale is still available over the next few days, and can be ordered online at www.lahak.org/sale