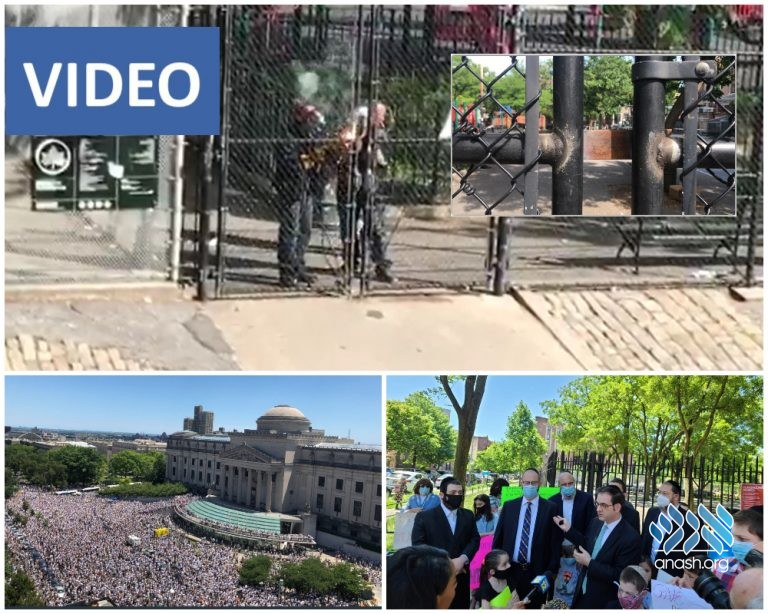 The NYC Parks Department welded shut the doors of a Williamsburg park to make sure that children shouldn’t be able to play in the park. Other parks throughout the city remain open.

The NYC Parks Department was in Williamsburg on Monday morning and were seen welding the doors of shut at the Middleton Playground to make sure that children shouldn’t be able to play in the park. Other parks throughout the city remain open.

This comes just one day after children and elected officials gathered outside the locked gates of a public park in Midwood, and calling on DeBlasio to “end the madness” and “immediately reopen our playgrounds.”

Not far away, tens of thousands of people were permitted to gather for a protest outside the Brooklyn Museum on Eastern Parkway, to rally against discrimination. Parks in other parts of NYC were also untouched, with only select parks in Williamsburg receiving the ‘special treatment.’

Over the past few days, hundreds of young Jewish children took over the streets of Williamsburg on Thursday, Friday, and Sunday, calling on Andrew Cuomo and Bill de Blasio to open sleepaway camps and parks.

The kid protestors chanted “We want camp, we want camp,” and held signs that say “No camps, no justice” and “Kids Lives Matter” as they rode on the sidewalks and through traffic.

On Thursday Governor Andrew Cuomo said he is allowing localities to reopen playgrounds, but the final decision is up to local authorities. Mayor DeBlasio is still keeping them closed “out of an abundance of caution”.

In yet another sign that the Mayor and Governor are basing their decisions solely on ‘science’, as they stated time and time again, City Hall confirmed that contact tracing workers hired to trace the interactions of people infected with COVID-19, have been instructed not to ask anyone with the virus whether they recently attended a demonstration.