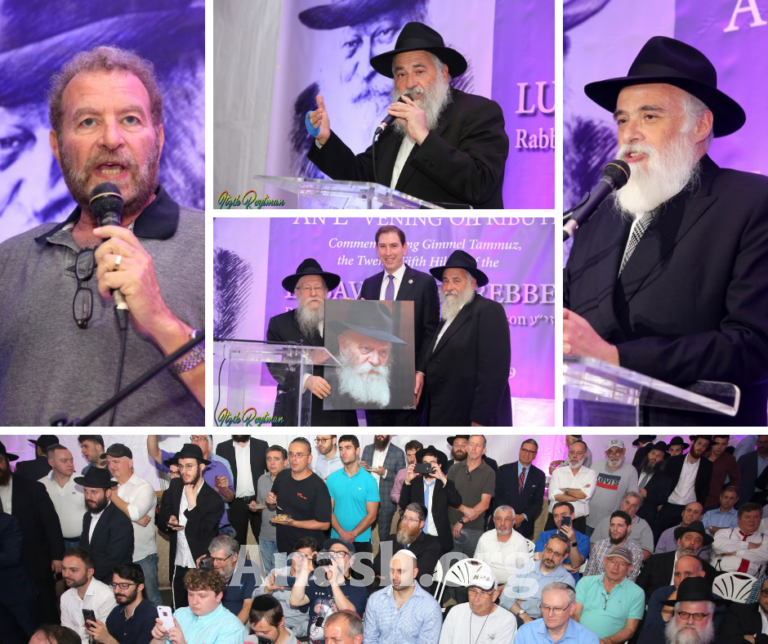 An overflow Farbrengen of Shluchim, their friends, congregants and supporters in the New York Metropolitan area took place near the Ohel. The Event “A Meeting of the Souls” organized by the Lubavitch Youth Organization was on Tuesday evening before Gimmel Tammuz.

The crowd was treated by a performance by internationally acclaimed star Dudu Fisher. During the evening famous Chazzan Rabbi Schneur Zalman Baumgarten led in singing some of “the Rebbe’s Niggunim.”

The MC was Rabbi Tuvia Teldon, head Shliach of Long Island. The first speaker was Rabbi Moishe New, Director of the landmark Chabad House, “Montreal Torah Center,” explained how through the Rebbe one connects with his inner-self and with every Jew.

Councilman Deutsch spoke about the inspiration he gets from the Rebbe’s teachings that helps him in his work in New York City. The Councilman mentioned those activities in detail.

The highlight of the evening was the Guest Speaker Rabbi Yisroel Goldstein the famed Shliach of Poway California.

Rabbi Goldstein related in detail what happened in his Chabad House on the eighth day of Pesach, the shooting, the life-saving rescue effort. Rabbi Goldstein also told about the call he received from United States President Donald Trump, the visit to White House, his talks in the White House and at the General Assembly of the United Nations.

What was evident and transmitted during the entire presentation was the deep selfless dedication of a Chossid to his Rebbe and the steady connection to do, at every moment and at every turn, exactly what the Rebbe asks of us.

Rabbi Goldstein concluded that as we are approaching Gimmel Tammuz we are assured that the Rebbe is with us watching us, guiding us and blessing us. “It’s what we needed to hear and take home with us. This was truly an evening of inspiration that we all needed” said a proud participant.

Indeed “A meeting of the Soul.