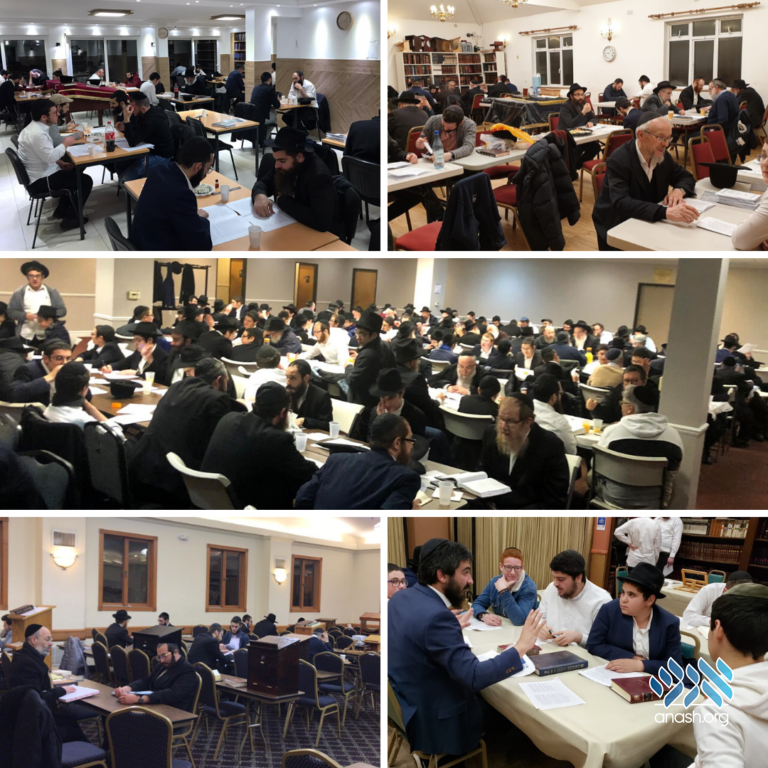 85% of the Rebbe’s Torah has already been divided to be learned, and now Vaad Or Vechom has welcomed individuals to join the campaign.

Each sicha, maamar and letter of the Rebbe was divided into units designed to be studied by a chavrusa over the course of an evening of learning. Tens of communities have already held such evenings of learning, ranging from the sizable Anash communities in London, Paris, Jerusalem and Los Angeles to smaller communities such as Summerlin, Nevada and Albany, NY.

“I had a wonderful evening learning the Rebbe’s ma’amorim,” said Moshe, a participant. “Behashgacha pratis, I picked a ma’amar that addressed a question that I was walking around with after learning Likkutei Torah last Shabbos!”

“Coming together for a night of learning has done a lot to generate the feeling of chassidim zeinen ein mishpacha,” said Sholom Rabin of Monsey. “It’s a great way to prepare for Yud Shevat with darkei hachassidus.”

“It was an incredible show of achdus in the community — almost a yeshiva-like geshmacke setting and atmosphere,” said Rabbi Motti Rubin, shliach and community leader in Albany, NY. “Older people, younger people — everyone enjoyed it! Such a special way to give nachas and connect to the Rebbe for Yud Shevat — 70 years. We all feel so connected to brethren chassidim the world over in an unprecedented way!”

There is an unprecedented achdus and connection that Chabad communities are having through this,” said Rabbi Moshe Levin, shliach  and rabbi at Bais Betzalel Chabad in Los Angeles, California. “There’s a feeling of chayus and simcha. People are seeing what’s happening in other communities and are impacted by it.”

In response to the many requests they have received, Vaad Or Vechom has opened the campaign to individuals who are not part of an Anash community. They can join at 70strong.world/general.

As previously reported, if you join before Rosh Chodesh Shevat, you will be entered into a raffle for a ticket to New York for Yud Shevat.

Groups of shluchim may sign up as a group — and many have, such as Chabad on Campus shluchim, Carribean shluchim, Italian shluchim, and many others. To sign your community or group up click here.

“What enjoyable community learning,” said Yehoshua Sussman of Albany, NY. “Communal spirit; learning with someone you may not have learned one-on-one with before; an important gift to give to the Rebbe!”

“The tremendous achdus created through learning the Rebbe’s Torah in each community, and connecting with the wider community of chassidim will surely accomplish the ultimate Bosi Legani, with the complete revelation of the shechina in this world, with the coming of Moshiach,” said Rabbi Mendel Munitz.

The Chaluka of the all of the Rebbe’s Torah is sponsored by Mr. & Mrs. Josh and Robyn Goldhirsch and family of Melbourne, Australia.