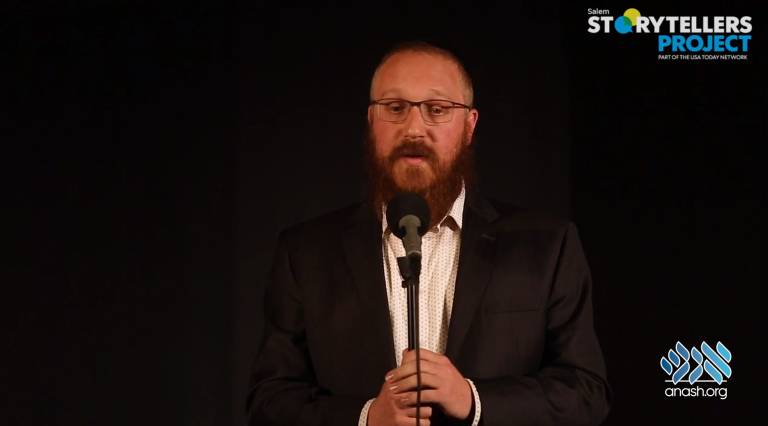 The Storytellers Project is hosted in a number of cities across the country by local papers which are affiliated with USA Today. The theme of the Salem event at which Rabbi Perlstein spoke was ‘Our Family, Our Culture.’

Shedding a positive light on the Lubavitch world in which he was raised, Rabbi Perlstein shared how his upbringing shaped who he is today. He spoke of the values his loving parents imparted to him, and the focus they placed on him being a mensch. He spoke of his maternal grandparents, both holocaust survivors, and how they modeled for him the true meaning of resilience, commitment and remaining positive in the face of hardship.

Rabbi Perlstein and his wife Fruma have faced their share of challenges in their shlichus; arriving in Salem just before the 2008 economy crash, they soon found themselves struggling with debts that could not be paid due to pledges that hadn’t been filled. In 2010, they lost their home, but the Perlsteins did not give up. Baruch Hashem, they now have a thriving Chabad House where they serve their community alongside their eight children.

Today, Rabbi Perlstein shared, he strives to raise his children with the values to which he credits his success as a shliach and parent.

“Being a shliach comes along with sacrifices, particularly when it comes to ensuring the chinuch of our children; however, reading my grandmother’s recently discovered diary in which she expressed her determination to raise her children in a happy, wholesome environment, helps me put my own challenges in perspective.”