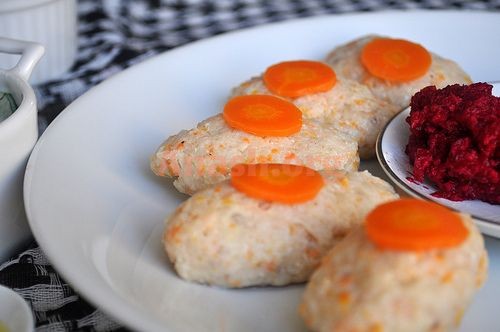 How a chassidisher Yid’s insistence on keeping his parents’ minhogim on Pesach made his father come to him in a dream to tell him his recipe.

Bechadrei Charedim recently had this story:

A Kretchnifer chossid whose father passed away this year was in a dilemma.

Many “Poilisher” chassidim refrain from eating fish on Pesach for various reasons, mostly because of how fish was packed and stored back in the Old Country. His father was a cook who would prepare “falsheh fish” – a fish substitute made of ground chicken – for the family every year for Pesach. It looks like gefilte fish and is even eaten with chrein, just like any regular gefilte fish.

Reb Yosef Shmuel was for decades the cook in the house of the Kretchnifer Rebbe of Rechovot. He passed away on Sukkos of this year, and the honor of cooking for the court of Kretchnif was passed on to a different family. His son, Duddy could not figure out the recipe for the falsheh fish, and after a frustrating time searching for it was about to give up on his minhag. His wife’s family ate fish on Pesach, and he was going to eat fish just like them.

But two weeks before Pesach the father came to his son in a dream and revealed the recipe to him! In the morning Duddy remembered what his father said to him in the dream and quickly jotted down the recipe! He prepared the falsheh fish and it was a hit! Great taste and texture!

Duddy went and repeated what happened to the Kretchnifer Rebbe who said “If a minhag Yisroel is considered to be part of Torah, then this is proof that this minhag of yidden to refrain from eating certain foods on Pesach was accepted on high.”

Questions? Comments? Write to us at [email protected]