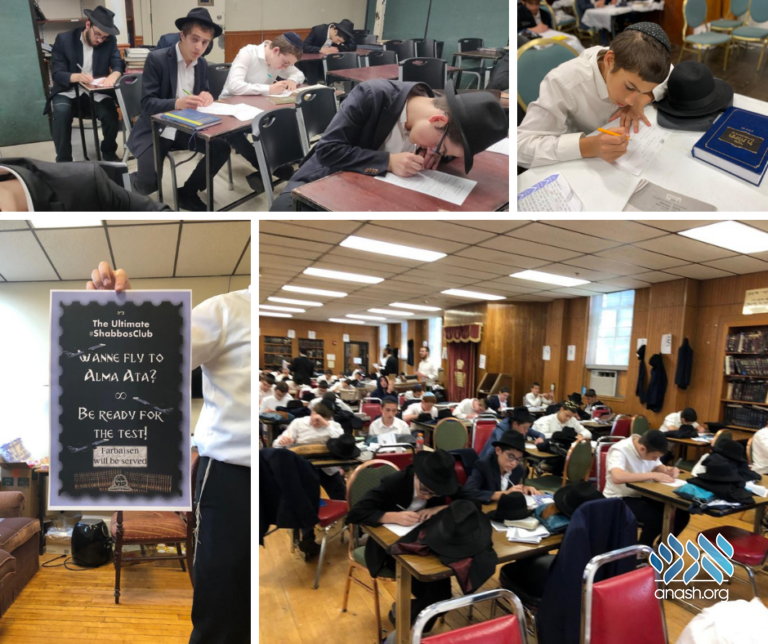 Following the amazing success of the mivtza, additional tickets to Alma Ata will be awarded.

The first-of-its-kind venture is definitely among the highest priorities among bochurim currently in Yeshivos and summer camps. Every week, they get tested on material from the Rebbe’s Sichos, the Rebbe’s father’s Torah, and fascinating memories of Rebbetzin Chana, and enter into raffles for amazing prizes.

Impressions and photographs from a special visit to the Yeshivos in the midst of the Mivtzah.

After receiving amazing feedback for the Campaign that has swept through Yeshivos and summer camps with thousands of participants, we decided to visit five special locations (from among many more) to see how it looks in the field:

Hundreds of bochurim are present in the Zal, quietly and carefully transcribing their answers about the content studied during the previous week, from the profound teachings of Reb Levi Yitzchak. No doubt, such a scene brings a major nachas ruach to the Rebbe.

During the Chof Av Farbrengen in 5711, the Rebbe related: “After Reb Chaim Brisker had finished examining my father for Semicha, he said: “Gevald Reb Levik, such a good head, and what did you invest it in?”

A year later, in 5712, when a Chassid named his son Levi Yitzchak, he received a letter from the Rebbe which contained the following amazing words: “Just as he brought me immense gratification by naming his son after my father, of blessed memory, may Hashen grant his immense gratification and nachas from your entire family and yourself as well.”

Two hundred and thirty youngsters, some already Yeshiva bochurim and others entering Yeshiva this upcoming year, pace through the hallways enthusiastically reviewing the content of the special booklet prepared by a committee of Rabbonim and Mashpiim, led by Rabbi Chaim Shaul Brook, director of Lahak Hanachos, who has dedicated immense efforts to publish the Torah of the Rebbe and Reb Levik, as well as the memoirs of Rebbetzin Chana.

In one corner, a group of fifteen-year-old bochurim heatedly discuss a Sicha where the Rebbe explains the profound answer of his father in a difficult Sugya, and in another corner, one bochur relates to another how Reb Levik ended up in his exile in the desolate reaches of Kazakhstan.

Friday, a short time before Shabbos, Mesivta Lubavitch of Toronto:

An illustrated sign welcomes us at the entrance to the Zal – “Want to fly to Alma Ata? Be ready for the test”!

As we’ve publicized in the past, the students who receive a high average grade on the four weekly tests will enter a raffle for fifty (!) air-tickets to visit the Tziyun of Reb Levi Yitzchak in Alma Ata on Chof Av, the 75th Yom Hilula, and then return in time to be at the Ohel on Chof Av as well.

A Mashpia shares with us that since the Mivtza was announced in the Yeshiva, the bochurim are on a high. During a random phone call between a parent and the Rosh Yeshiva which was brought to our attention, Mrs. Sarah P. of Atlanta shared the following observation:

“My husband and I, shluchim in Atlanta, have had unbelievable nachas from our son’s enthusiasm, from the way he speaks of the learning, about the new worlds of Torah knowledge that he had never previously encountered, and about the koch in learning that has entered the Yeshivah. If this is our experience, it is easy to imagine the nachas that the Rebbe himself derives from this project. I wanted to personally thank every person that worked on this amazing mivtza, as well as the benefactors who made it possible.”

After an uplifting Shabbos in Yeshivah, a test was held, and the Hanhala fulfilled its promise posted on the sign on Erev Shabbos: “Farbeisen bishefa for all those who participate” (even though that is obviously only a side point to the mivtza)…

As written on the digital announcement board in the Zal, after Seder Chassidus at nine-thirty, instead of resting from a full day of learning, one hundred and sixty bochurim return to their seats for the test on the weekly material. Immediately following the test, the results are sent back to the central office in upstairs 770.

The sound of Torah learning fills the Third Tent near the Ohel, where one hundred and fifty bochurim of the Yeshivas Kayitz of Yeshiva Mesivta Menachem, Hastings-On-Hudson (who hail from seventeen different Yeshivos Ketanos!) have arrived with their staff for a day of Hachana before entering the Ohel.

Along with the Yeshivas Kayitz’s booklet of Shiurim, each bochur has the “Kuntres Hachanah for Chof Av,” the central focus of this summer in every Yeshivah. The booklet is studied with enthusiasm; there could be no better preparation for entering the Rebbe’s Ohel. The Mashgiach shares with us that although he has seen many mivtzas in Yeshivos, never before has he seen such enthusiasm and excitement.

The learning program of this Mivtza has been set up to accommodate the specific ages of the participants, both through nekudos in various parts and translations of difficult concepts, to ensure each student understands them properly. The Torah of Reb Levik is expanded and elucidated, thanks to the work of Rabbi Dovid Dubov of Princeton, NJ, and Rabbi Eli Wolff of Kfar Chabad, and the booklet was beautifully designed by Chazak Publishings of Rabbi Uri Wilhelm of Nachlas Har Chabad. The coordination with Yeshivos and summer camps, publishing and shipping, was done by Lahak Hanachos.

According to the organizers, the results of the tests coming in from the 2,500 participants are far beyond their initial expectations, and they are therefore seriously considering widening the pool of prizes.

At the start of the Mivtza, it was announced – in the twenty-five different Yeshivos that are participating – that an average of 80% on the tests would enter a participant into a raffle of fifty tickets to Alma Ata, sponsored by Reb Sholom Lein, Reb Yossi Katz, and others. However, due to the amazing results, the organizers are thinking of widening the raffle to include sixty tickets. Likewise, instead of a raffle of twenty-five sets of Sefer Maamorim, they are thinking of raffling off one hundred sets instead.