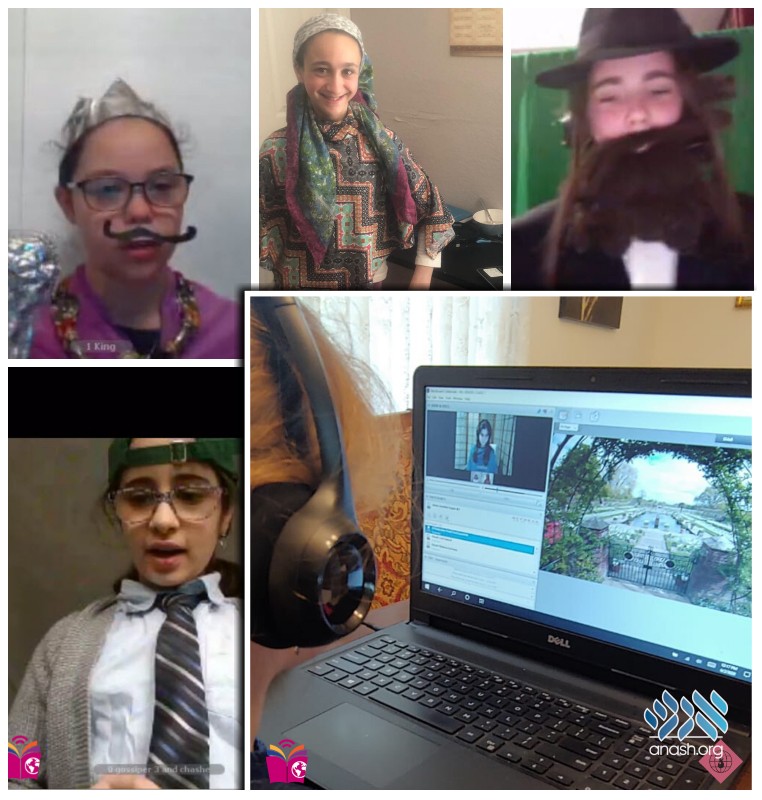 Students of the fifth and sixth grades in the Nigri International Shluchim Online School put on a beautiful, virtual live production, sharing a message of the eternal inner spark within each soul.

Students of the fifth and sixth grades in the Nigri International Shluchim Online School put on a beautiful, virtual live production, sharing a message of the eternal inner spark within each soul.

The fifth and sixth grade actresses put on a live show, while each in their own homes all across the world. The girls kept the audience spell-bound with live choirs, acting, and dance videos, sharing their technical and artistic talents. Their classmates, friends and families watched on as they seamlessly maneuvered the mics, cameras, and backdrops, all while singing, dancing and reciting lines like a typical production.

“Being in drama-choir was so much fun!” said Etty Hadokav in 6th grade. “I really enjoyed practicing with my friends and being able to be in a production online!”

“The Adopted Princess brings us back to the mid 1600’s, following the journey of young Esther, daughter of the famous R’ Shabsi HaKohen, left alone in the forest to die and adopted by the King of Poland,” explained Rivky Greenberg, director of the production “The audience joins in her struggle to stay strong against the influences of the glorious palace life leading to an ultimatum to convert and marry a royal, wealthy prince. The story follows her courageous journey as she is put through the test to bravely stand proud as a Jewish girl.”

“The storyline and message really resonated with these girls,” remarked Morah Devora Leah Notik, Associate Director. “Through beautiful singing, dancing, and acting the girls had a chance to express their proud identity as Shluchos and role models. The creative experience was uplifting, energizing and inspiring for the performers and for the entire school!”

Much thanks and appreciation goes to Rivky Greenberg, extra-curricular programming director, for directing the girls and working with them to produce this memorable show.

Thank you to the eighth grade production heads for putting tremendous time, creativity, and effort behind-the-scenes.

Thank you to the parents of the students for making this long-distance performance a huge success, and to the fifth and sixth grade teachers, Morah Greenes, Morah Horowitz, Morah Myhill, Morah Lezell, and Morah Scharf for their tremendous dedication, encouragement, and warmth.

The Nigri International Shluchim Online School is a division of The Shluchim Office.