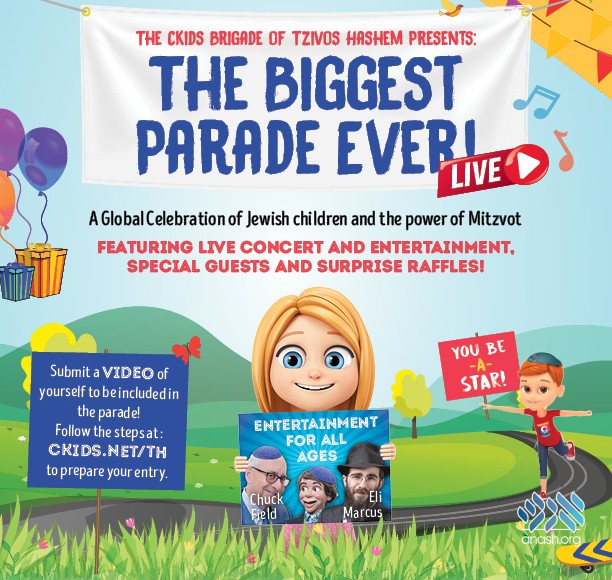 Despite Coronavirus shutdowns, Ckids is organizing the biggest ever Live Lag Baomer parade featuring Eli Marcus, a ventriloquist, and a surprise guest.

Year after year, kids look forward to gathering for a Lag Baomer parade. For over five decades, the Rebbe encouraged and participated in lively and memorable Lag Baomer celebrations outside 770. After Gimmel Tammuz the parades continued, with streets closed off for the occasion and thousands of children gathering in front of 770 to celebrate Jewish pride and unity.

Until this year, when an unforeseen global pandemic will change the way we’ve been celebrating Lag Baomer for hundreds of years. “We won’t be together in person,” says Rabbi Moshe Kotlarsky, Vice Chairman of Merkos Linyonei Chinuch, “but if anything, this year’s Lag Baomer parade promises to be more powerful than ever.” A virtual program will allow literally tens of thousands of Jewish children across the globe to participate in a day celebrating Jewish children.

“We don’t understand why Hashem does things,” says Rabbi Mendy Kotlarsky, vice chairman of Merkos 302, the organization behind Ckids. “But we are using this unique opportunity as a chance to reach thousands of kids who otherwise wouldn’t travel all the way to Crown Heights.”

Ckids is an organization devoted to providing rich and meaningful Jewish experiences for children at Chabad houses worldwide. And this year’s Lag Baomer festivities will be open to the entire Jewish community as well.

The program, like everything produced by Ckids, promises to be both educational and exciting. Ventriloquist Chuck Field will entertain kids along with a musical performance by Eli Marcus, sicha of the Rebbe, and a surprise guest from Jerusalem. Raffles throughout the rally will reward kids who are following along.

The rally will also mark the launch of a new Tzivos Hashem brigade for Chabad houses, with soldiers called up in an honor roll and honored with the 12 pesukim. Winners of this year’s JewQ champion will also be featured.

At a time when Jewish unity matters more than ever before, Ckids has once again stepped up the plate, promising a Lag Baomer program that won’t disappoint. Save the date! The biggest Lag Baomer PARADE will air LIVE on Tuesday, May 12, at 5:30pm EST.

You don’t want to miss it!