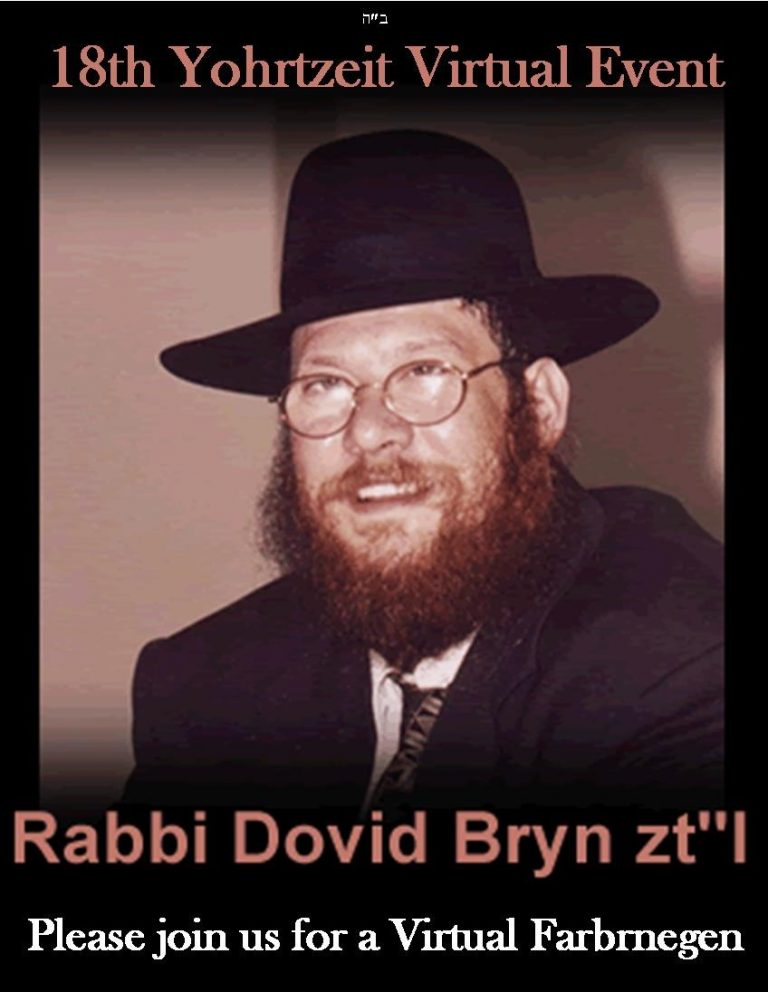 The 18th Yartzeit Of Rabbi Dovid Bryn will be marked tonight with an online farbrengen. Rabbi Bryn was a Chasid, a Teacher and a Friend, who left this world too soon, but who touched the lives of thousands.

Thursday, 6 Iyar, marks the 18th Yahrtzeit of South Florida Legend, the beloved Rabbi Dovid Bryn a”h founder of Chabad Chayil & the California Club Shul. Mostly known for his unending acts of kindness and genuine love for every human being, he is truly missed by all who knew him.

Some rabbis are known for their gigantic shuls, but Rabbi Bryn had a much bigger Shul, one not bound by walls. His shul was in the flea markets, soccer fields of the JCC & in people’s homes. His Sunday afternoon would be spent in a teenager’s living room with a pair of Tefillin and a group of friends. His Shul was in the community’s hearts.

Rabbi Bryn was a Shliach to North Dade, whose life was tragically cut short at age 40 by Marfan syndrome, a condition that affects the body’s connective tissue. For over a quarter of a century, Rabbi Bryn – the son of Holocaust survivors – courageously battled the fatal disease that decimated his heart, yet managed to minister to, counsel, and save tens of thousands of Jews and non-Jews alike.

Rabbi Bryn fed the hungry and poor, counseled the sick and the troubled – all with great courage, fortitude and self-sacrifice. He arranged marriages, taught Torah and ethics to thousands, bridged the interfaith gap by working closely with people and clergymen of all faiths … he was the living embodiment of kindness and bravery.

Some might be troubled by the precariousness of constantly living on the edge of existence, but the rabbi’s overflowing concern for others left no room for worry over his own well-being. He lived the equivalent of 120 years of good in a third of the time.

One friend commented on RabbiDovidBryn.org which was created to remember the legendary Chassid, ‘If he could breathe, then he would talk to others about G-d’s good, the beauty of a Mitzvah, or life’s bright spots. If he could walk, then he would go to share life with others and show positive perspective as it should be seen. If he could drink, then he would toast L’Chaim to all things positive and constructive. If he could sing, then he would. If he could do, then he did. He showed strength not owned by men who appear stronger. He showed love that is only written about. He lived a full life of treating others as one would treat themselves. When I need an example of the unrelenting power of love, I think of him.’

For the past 17 years, we’ve had an annual get-together Farbrengen, to say a l’chaim, reminisce about the good times shared together and, most important, to talk about how his chesed –  his loving kindness for every human being could be emulated. Due to the COVID-19 limitations we now find ourselves in, we have the opportunity to open up the Farbrengen to anyone in the world, by hosting it virtually! Please join us Thursday, April 30, 8:30pm, for an hour-long Farbrengen & inspiration. The farbrengen will be broadcasted on Facebook Live as well as YouTube Live. It will also be shown live at RabbiDovidBryn.org.

To view or share photos or experiences of this remarkable man, please visit RabbiDovidBryn.org. You can also learn about the Special Tribute Torah being written in his honor and purchase a letter, word or parshah by calling 305-770-1919 or visiting the website. There are only 8 portions left! If you and seven others take a Torah portion today, this special Torah can be completed, G-d willing before Rosh Hashanah!

Since this year marks his 18th Yahrtziet, and 18 represents life, we ask you to do something, to ensure that Rabbi Bryn’s life & legacy continues. Please dedicate this day to doing an extra Mitzvah, by going out of your way to doing someone a favor. You can be his hands and feet, in making this world a better place. Think global, but act local! Don’t push it off for tomorrow, do something today! And you will have a tremendous part of bringing healing to a wounded world; making it a better place for all, one good deed at a time, until the world reaches perfection, with the coming of Moshiach. May that happen today!