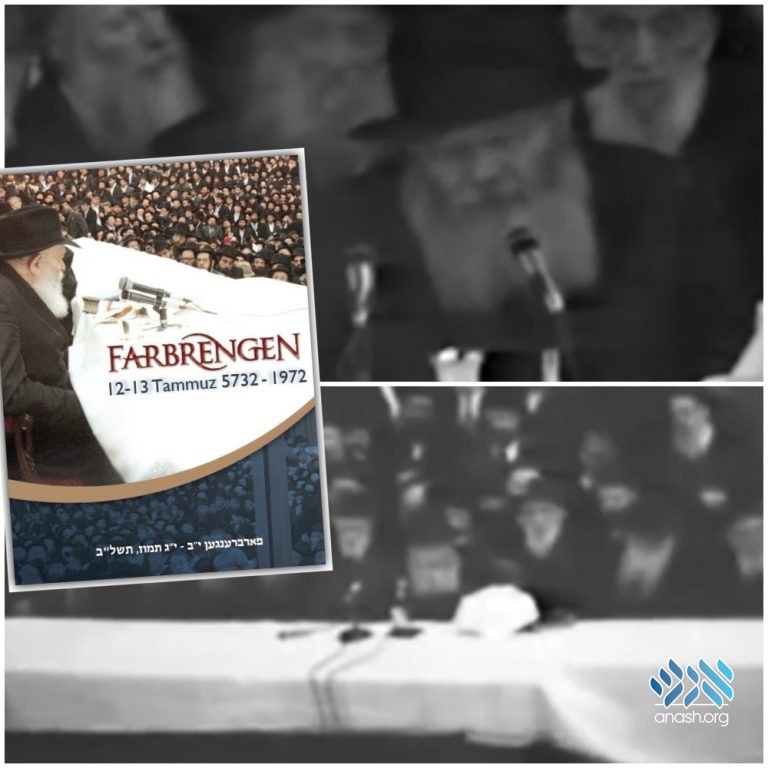 Just in time for Gimmel Tammuz, JEM released a newly restored video of the Rebbe’s Farbrengen marking 12 Tammuz 5732, one of the first farbrengens ever filmed

Just in time for Gimmel Tammuz, JEM is excited to release a newly restored video of the Rebbe’s Farbrengen marking 12-13 Tammuz 5732-1972.

This black and white video, one of the first Farbrengens ever filmed, was a landmark Farbrengen. With thousands of young people crammed into 770 to hear the Rebbe’s words, the Rebbe laid out his vision regarding the task and mission he placed on the young. Using powerful lessons from the self-sacrifice of the Previous Rebbe, the Rebbe speaks about the endless potential of the youth and demonstrates how they can literally change the world.

The Rebbe also dwells on the inherent potential that lies in the thousands of new immigrants arriving from the Soviet Union, and honors one young man, the newly arrived Chazan Tzatzkes, to lead the crowd in a joyful repertoire of Russian niggunim. Later in the Farbrengen, the Rebbe distributes Mashke to whoever established an institution in honor of the Rebbe’s seventieth birthday, and declares the “tikun” for whoever did not: to establish two new institutions instead.

The five hour event will be released in two segments: the first in honor of Gimmel Tammuz, and the second with the approach of Yud Beis Tammuz. Both will be available on Jem.tv for the small price of $7.

One of unique characteristics of young people, the Rebbe says in this Farbrengen, is that “they have not yet accepted the inevitability of compromise.” This Gimmel Tammuz, don’t compromise. Watch a Farbrengen, listen to the Rebbe’s words “from the original,” and internalize the Rebbe’s message.

Watch here a segment of the Farbrengen previously released on Living Torah.