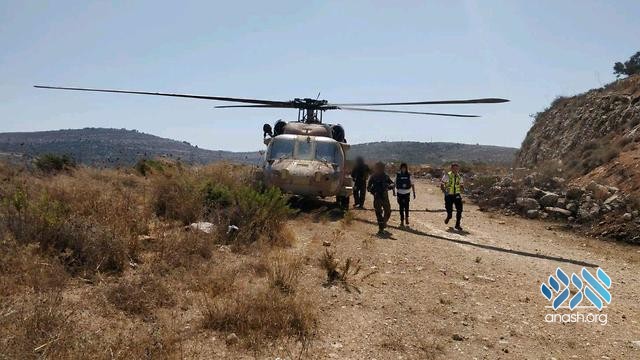 17-year-old Rinah Shenrab, Hy”d, was killed Friday morning when a terrorist threw a hand grenade or bomb from a passing vehicle at bathers in a water spring outside the town of Dolev in Shomron. Her father, Rabbi Eitan, 46, and brother, Dvir, 19, were also wounded in the attack. They were treated at the scene by rescue personnel and taken by helicopter to Hadassah Ein Kerem hospital in Yerushalayim for further treatment.

A Hadassah Ein Kerem spokesperson said the father was in moderate, stable condition, while his son, who sustained injuries throughout his body, including to his stomach, from the blast, was unconscious and connected to a respirator.

The levayah of Rinah will be held 3:30 p.m. Friday, at the Lod cemetery.

Palestinian media reported that IDF forces had set up roadblocks and were conducting searches in the western Ramallah area, southeast of Dolev.

Commenting on the attack, United Right List MK and Dolev resident Moti Yogev said that “in a place where Jews seek out water and life, the Arabs seek death and murder. To stop the wave of terror attacks and to save lives, we must strengthen our rule in Yehudah and Shomron, to kill the heads of terror in a way that will deter attacks, and strengthen Jewish settlement.”

The blast occurred at the Ein Bubin spring, south of Dolev, approximately 6 miles east of Modiin.

All are asked to daven for the refuah sheleimah of Eitan ben Chanah and Dvir Chaim ben Shirah Esther.