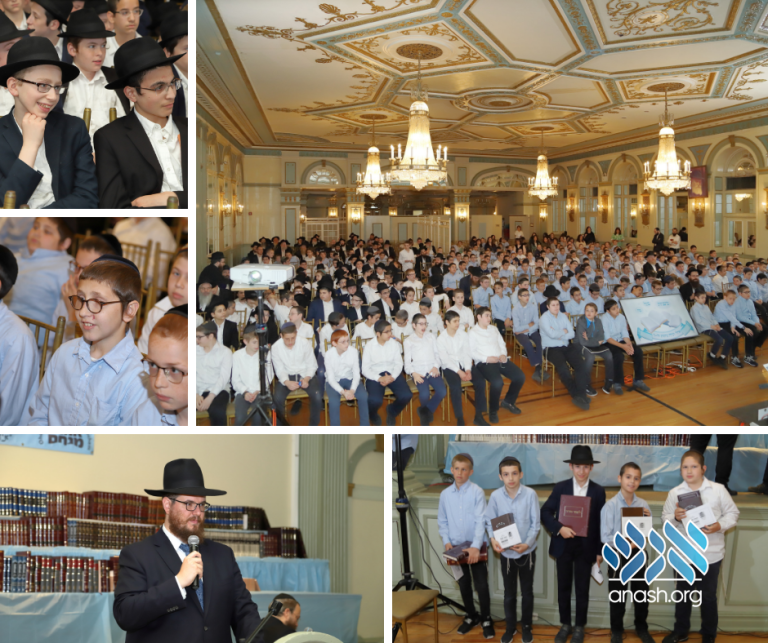 Boys of Oholei Torah learned thousands of mishayos, perakim of Tanya, blatt gemorah and yedios kloliyois by heart and were awarded in a grand ceremony.

Oholei Torah once again has brought excitement and special chayos to its talmidim with the annual Mishnayos Ba’al Peh program. The Rebbeim have repeatedly written that the foundation of chassideshe chinuch is to chazzer mishnayos wherever one may be. This project cultivates an atmosphere of kedusha and connection to the Rebbe and Yiddishkeit.

Tens of thousands of mishayos, perakim of tanya, blatt gemorah and yedios kloliyois were learned by heart. 225 talmidim of 5, 6 and 7th grade participated.

In more recent years, a website was set up to follow the progress of the talmidim. To see a full listing of the project, and the phenomenal achievements of the talmidim, please visit www.baalpeh.com/ny/oholei-torah/summary.html.

The program after Yud Shvat and continued till Yud Aleph Nissan, where Rabbi Lustig brought the names and accomplishments to the Rebbe’s Ohel as a gift from the Oholei Torah talmidim.

The gemorah Ba’al peh aspect went past shavuous, where many talmidim learnt baal peh the perek of gemoreh they learnt last year.

This past week a grand finale was held with the distribution of prizes. The talmidim were able to choose from a wide array of seforim, all according the points they accrued in the Mishnayos ba’l Peh project.

At the finale, R’ Levi Y. Wilhelm, a parent, spoke to the talmidim.

Rabbi Hershel Lustig was presented with a special appreciation gift on behalf of the teachers of Oholei Torah for his over 44 years of outstanding dedication. Rabbi Lustig began the mishnayos Ba’ale Peh project over 36 years ago, and is very pleased to see how it is blossoming today.

At the event a Tzivos Hashem promotion Ceremony was held, where the soldiers of Tzvisos Hashem were saluted by rank, the talmidim the recently went up in rank were promoted by the current generals in Tzvios Hashem.

Rabbi Yehoshua Lustig thanked Rabbi Mendel Levin – Base Commander at Oholei Torah, who coordinated the Tzivios Hashem Projects, for doing an outstanding job. For his dedication he was presented with a special appreciation gift.

Many parents and grandparents joined the event, all schepping yiddeshe nachas as they watched their sons receive the recognition they deserved for their hard work.