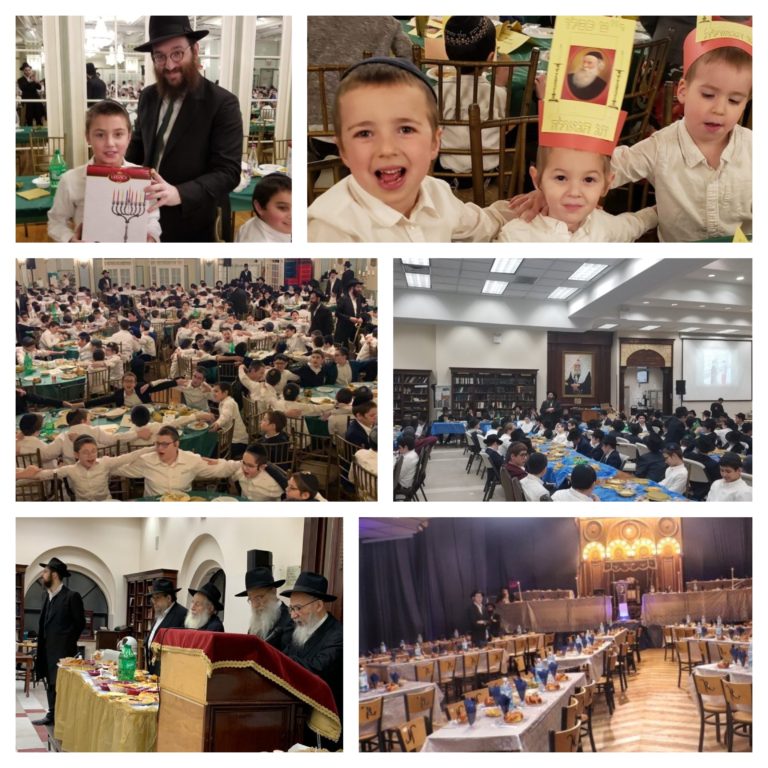 The students, teachers, and hanholo of Oholei Torah marked the Yom Tov of Yud Tes and Chof Kislev with two days full of joy, warmth, and chassidus. Every grade and division participated in events and farbrengens designed to bring the story and lessons of this holy day to life.

From our youngest students, the pre-upsherin kinderlach of Kindergarten, all the way through to our accomplished bochurim of shiur hey zal, this years Rosh Hashana of Chassidus was a day to remember.

Both sites —  East Flatbush and Eastern Parkway —   came together to celebrate with a grand farbrengen and rally. Organized by Director Faige Winner, each young talmid proudly walked into the room wearing their specially decorated hats and sat down at beautifully set tables tables decorated with balloons.  The morahs led the talmidim in song and the reviewing of the Tanya they had learned by heart. It was a day of simcha and chassidus, and surely one that will imbue them with a warmth and love for yiddishkeit and chassidishkeit for years to come.

A Fleishig yom tov seuda was served to all the divisions, featuring l’chaim, stories, and the singing of the Alter Rebbe’s niggun.

Rabbi Meir Shimshoni, Principal of Pre1A – 2nd grade, led the farbrengen in the Dining Hall and in the Beis Medrash. Rabbi Shmuel Zalmanov told stories and Rabbi Yossi Goldstein entertained on the keyboard.

For the students of grades 3 & 4, the day began with shacharis in the zal and a dvar torah. Later, Rabbi Levi Golomb, Principal of grades 3 & 4, led a farbrengen in the wedding hall, and Rabbi Zalmanov shared with them stories of Yud Tes Kislev, and they said Lchaim together.

Rabbi Yehoshua Lustig, Principal of grades 5, 6 and 7, led an event for his students in the Gutnick Ballroom, where Rabbi Chanoch Chaskind, Director of the Maor videos, farbrenged with them.

The 7th grade students davened Shacharis in the Heichal Shmuel dining hall.  Before davening, they were treated to a special shiur in chassidus on Perek Lev, 32 of tanya, by Rabbi Ephraim Mintz, Executive Director of JLI and an Oholei Torah Alumnus,

Grade 8 under Rabbi Yisroel Wilhelm held a farbrengen in the Raitport Beis Medrash. Rabbi Eli Landau, Mashpia in Ohr Menachem Queens Yeshiva, was the guest speaker. During the Farbengen a raffle was held for those talmidim who undertook to learn chitas every day.

In the Mesivta division, Rabbi Moshe Silman, Menahel, organized a beautiful grand farbrengen. A group of bochurim from shiur gimmel had helped set up the entire zal on Troy Avenue for the event. All members of hanhola joined, and the guest speaker was Rabbi Moti Lipskier, a well-known marbitz torah of Crown Heights.

Rabbi Nisson Deitsch, Menahel of Shiur Aleph and Beis Zal, held a farbrengen in a local Crown Heights shul for his bochurim. Fathers were also invited to join, and they sat together and were inspired by the bochurim and the Tamidei Hashluchim, who were the speakers and organized the farbrengen.

Later, a Seudas Yom Tov was held in the Beis Medrash, joined by all the bochurim and members of hanhola. The event featured videos of the Rebbe and much farbrenging and divrei torah and chassidus from the hanholo, and a Hadran during the seudah. In the words of Rabbi Elchonon Lesches, Menahel of the Beis Medrash, the bochurim “were in a world of pure chassidus for well over six hours”.

The students of Oholei Torah are a living monument to everything the Alter Rebbe fought and sacrificed for, and we are proud to watch them carry the torch of torah and chassidus into the future. With the chayus and chassidishkeit they absorb here, there is nothing they can’t achieve.