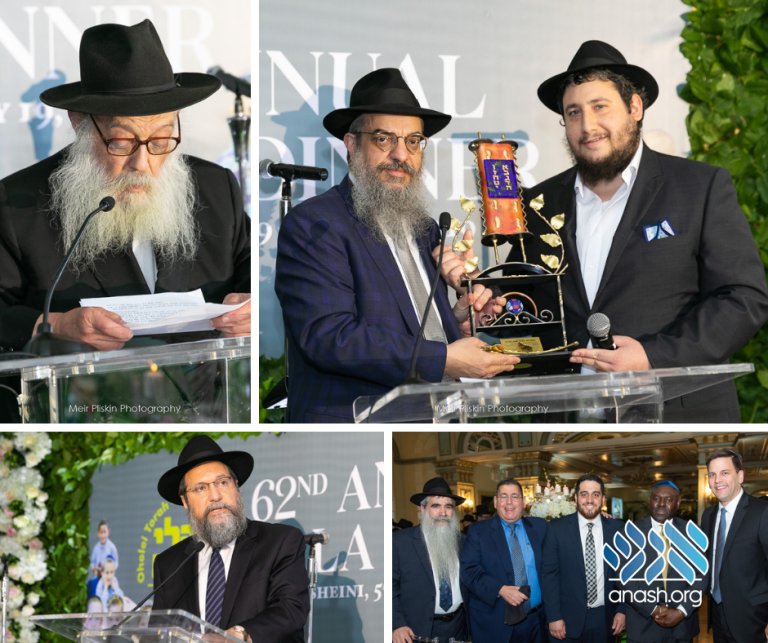 On Pesach Sheini, Oholei Torah celebrated its 62nd Gala Dinner, a major community event and one that was most cherished by the Rebbe.

The event began with a smorgasbord in the front loggia of the building, during which time the Dallek Family, close friends of Rabbi Yitzchok M. Kramer, administrator, dedicated a classroom in memory of their parents, Godfrey H. and Phyllis Dallek. The Dalleks have been longtime supporters – for over 40 years – and followed with great interest the devolopment of the school.

The Ballroom was lavishly set up for the over 600 guests. The evening’s Master of Ceremonies was Rabbi Yehoshua Lustig, one of the elementary school principals, who greeted and welcomed the guests.

Rabbi Leibel Groner, the Rebbe’s personal secretary, was honored with reading the Rebbe’s letter, and a Dvar Torah was read by Nochum Gurewitz, a sixth grade talmid of the yeshiva.

The Godfrey H. and Phyllis Dallek Memorial Tribute Award was presented by Rabbi Kramer, followed by the Founding Parents Award, in honor of Reb Mendel and Nechama Baumgarten, a”h. The Baumgartens were honored for their great mesirus nefesh during the beginning years of Oholei Torah, and many of their children and grandchildren attended the Dinner.

Rabbi Joseph Rosenfeld, Executive Director of the yeshiva and a personal close friend of the Baumgartens, spoke next and blessed the guests with Birkas Kohanim.

Rabbi Efraim Mintz, a member of the Oholei Torah Vaad Ruchni and Director of the Jewish Learning Institute, spoke passionately of the uniqueness of an Oholei Torah talmid and the important role of Oholei Torah, not only within Chabad but for Jewry throughout the world.

During Dinner, a musical perfomance was given by Yossi and Levi Baumgarten, both Oholei Torah alumni. Special Seforim were given to the Oholei Torah staff and faculty, containing over 40 letters from the Rebbe written to Oholei Torah,

The Young Visionary Award was presented to Sruli and Toby Richler, presented by Rabbi Nosson Blumes.

Sruli, in his speech, made a passionate call to the Oholei Torah administration and challenged them to get 20 ‘yungeleit’ involved, and the Board is already working to make that a reality.

As guests left the event, each one received a beautiful large Sefer Tehillim, befitting the upcoming yom tov of Shavuos, Dovid Hamelech’s yarzeit.

The event was catered by Ben Kohen, décor by Tammy Carmona and video by Zikron Digital. Meir Pliskin Photography.