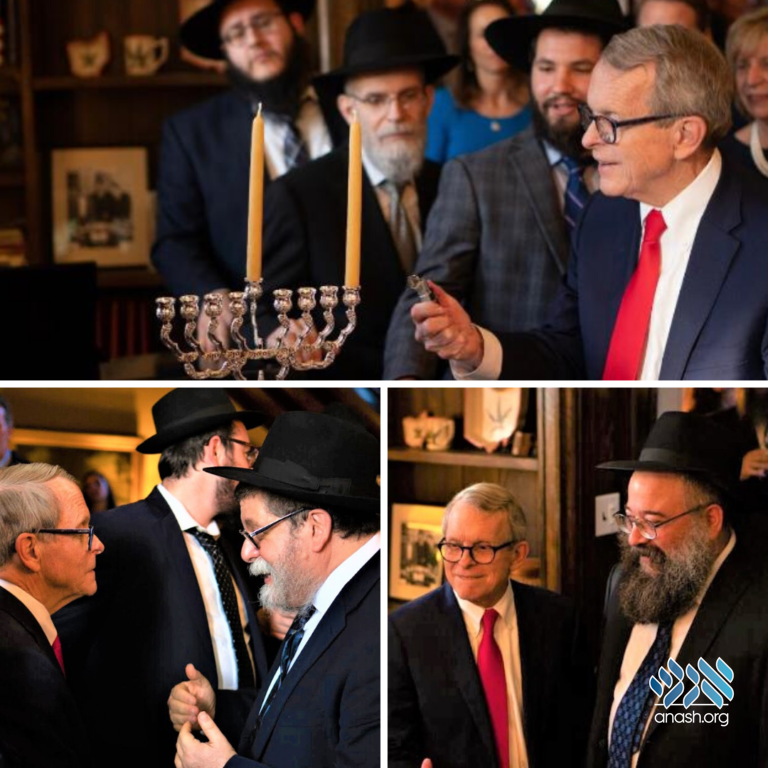 The Shluchim to the State of Ohio, representing their Jewish communities across the state, gathered to participate in this celebration. Representative Dave Greenspan, Representative Casey Weinstein and Director of Ohio Department of Health, Amy Acton, were also in attendance.

The miracle of Chanukah- the triumph of light over darkness, where one small cruise of oil lasted for 8 days, was palpably felt in the Governor’s Mansion. Governor Mike DeWine’s father, Private Dick DeWine, was part of the U.S Army’s 103 rd Infantry Division that helped liberate Dachau concentration camp.

“Private Dick DeWine fought for the downtrodden and the broken, with each individual he saved representing a small cruise of oil. Private Dick DeWine helped rescue and rekindle the flame inside the hearts of the Holocaust survivors,” said Rabbi Kaltmann.

74 years later, the son of Private Dick DeWine, Governor Mike DeWine and the Shluchim of Ohio stood together to light the Chanukah flames. Private Dick DeWine was a heroic foot solider and the attendees in the Governor’s mansion were modern day foot soldiers, or Maccabees- the ambassadors of the Lubavitcher Rebbe. The Rebbe saw the integral beauty and power of every soul, and that is why his Shluchim are there to care for every human being literally anywhere in the world.