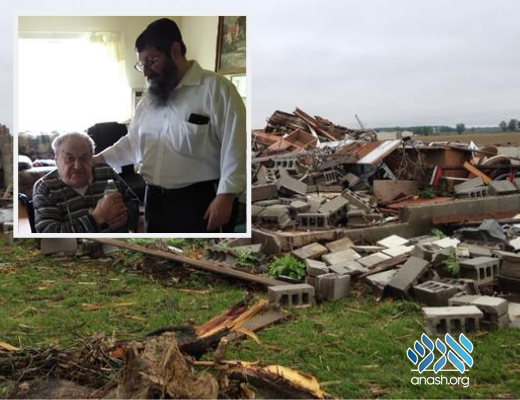 The sky over Dayton, Ohio, crackled and flashed. Rain and wind, thunder and lightning spread throughout the Greater Dayton region on Monday night, but it was two massive tornadoes that shattered glass, uprooted trees, toppled cell towers and tossed cars around like toys.

Thousands of residents of Harrison Township and Montgomery County, Ohio, were left without clean water and electricity as power lines were down. According to the Dayton Police Department, more than 400 structures were moderately damaged in the storm, with 45 severely damaged.

Among those who lost a business were Zeke and Iris Levi. Their daughter, Maytal, a reporter at Fox19 in Cincinnati, broadcast live from Harrison Township conveying to viewers what she was seeing on the ground.

“As a journalist, it’s always more emotional to cover stories that are personal, like the damage from these tornadoes,” she told Chabad.org. “My parents immigrated from Israel in the 1980s; [they] barely spoke English, but they turned their car shops into successful businesses that are now completely destroyed. These businesses were a part of my childhood, and put my siblings and me through college.

“We are just in shock and feel in limbo,” she continued.

According to Rabbi Nachum Mangel, co-director of Chabad of Greater Dayton with his wife, Devorah Leah, that sentiment is echoed by other Jewish residents in the hardest-hit areas, which are located north of downtown Dayton.

“You can’t describe the devastation until you see it,” said Mangel. “If you look at the auto shop, the storms picked up cars like toy trucks and just flipped them over. There were buildings destroyed all over the area. Then we went to the old Jewish neighborhood. We went to a senior center where there are Russian Jewish residents and made sure they had everything they needed.”

Mangel was accompanied on his visits by Rabbi Elchonon Chaikin of Chabad of Dayton and 9-year-old Yoel Simon, whose parents, Rabbi Levi and Rochel Simon, are the youth and family directors of Chabad of Greater Dayton.

“I felt a little good that it didn’t hit where I lived, but I feel bad for the other people,” he said. “We brought them water and cookies to make them feel good.”

Meanwhile, Yoel’s sister, Chaya, 11, was busy preparing meals, including hot soup and lasagna, that was delivered to people affected by the storm. She said, “I’m happy that I can help them in some way to make them feel better from their loss.”

According to Mangel, who has lived in Dayton for 26 years and said he has never seen anything like this week’s damage, Chabad’s work to assist others will go on.