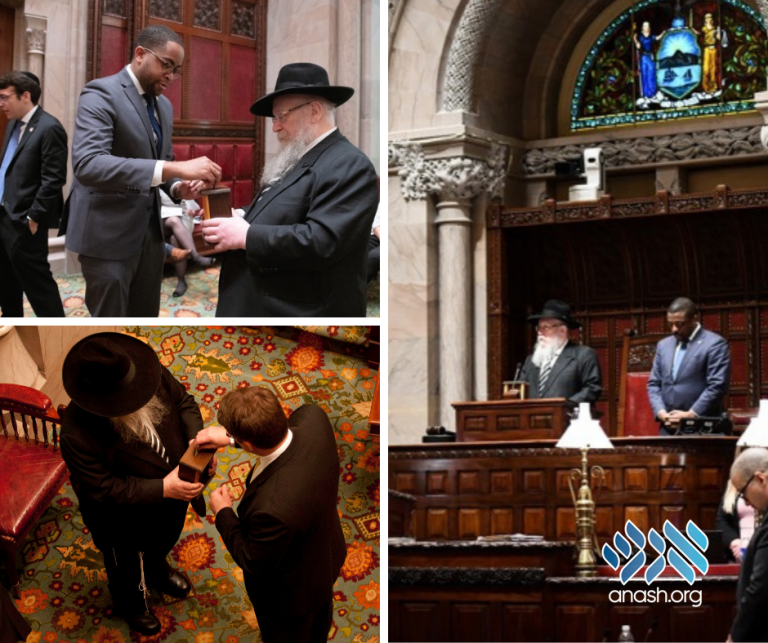 This Monday at the New York State Senate, Rabbi Shmuel Butman conducted a Moment of Silence and urged its implementation in New York schools.

The senate session was opened by Rabbi Shmuel Butman of Tzeirei Agudas Chabad (Tzach) who recounted the words the Rebbe told him years ago when he went to Washington to open the U.S. Senate. “Take with you a pushka,” the Rebbe said, “Let everyone see what you are doing, and let them know what money should be used for.” Keeping to the Rebbe’s words, Rabbi Butman placed a pushka on the stage, inserted a dollar, and invited the participants to do the same. “This is not a fund-raising effort,” he quipped, “If it were, we’d ask for much more. This an effort to do more goodness and kindness.”

With the world concerned for the safety of people in houses of worship, Rabbi Butman pushed for instituting a Moment of Silence in New York schools. Setting an example, he asked the attendees to take their own Moment of Silence and think about how the world isn’t a free-for all jungle but there is an eye that sees and ear that hears. One participant later said it was “a somber moment of deep soulful meaning.”

Senator Myrie spoke about the importance of recognizing the Rebbe’s work for mankind especially at a time of hate and anti-Semitism in the U.S. Referencing the attack on Chabad of Poway and the assaults closer to home, in his neighborhood of Crown Heights, he said, “We are living in incredibly dangerous times. And it is important that we speak to our unity, we speak and stand for the things that the Rebbe stood for, the education and edification of everyone, no matter what their race, ethnicity, or faith is.”