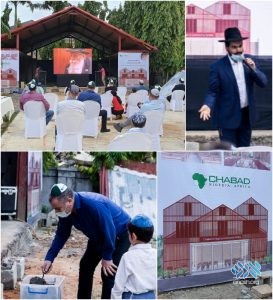 On Thursday, Gimmel Tammuz, a cornerstone laying ceremony was held Abuja, Nigeria for a new Chabad house which will be built to resemble Chabad World Headquarters in New York.

A new Chabad House being built in Nigeria will resemble 770 Eastern Parkway, Chabad World Headquarters in New York. The cornerstone for the new building was laid on Gimmel Tammuz.

Chabad in Nigeria, headed by Shluchim Rabbi Israel and Chaya Uzan, has been operating since 2013. In the 7 years since the shluchim arrived, they built a shul, mikvah and a school. The new center will incorporate all these activities into one campus.

In 2018, the campaign to build the center was launched. “The new institution will include our Chabad House, guest houses, a Jewish school, a kosher store and a center for our humanitarian work,” Rabbi Uzan told Chabad.org then.

This past Thursday, marking the Rebbe’s yom hilula on Gimmel Tammuz the cornerstone was laid for the new center, in a ceremony attended by local Jews.

The shluchim are based in Abuja, the country’s capital. They estimate that there are about 1,200 Jews, mostly Israelis, in Nigeria year-round. Some 50 families live in Abuja and 20 families in Lagos, the country’s largest city, some 467 miles away. Most of Nigeria’s Jews tend to live there for several years while employed at Israeli-based companies in the fields of construction, agriculture, technology and security.