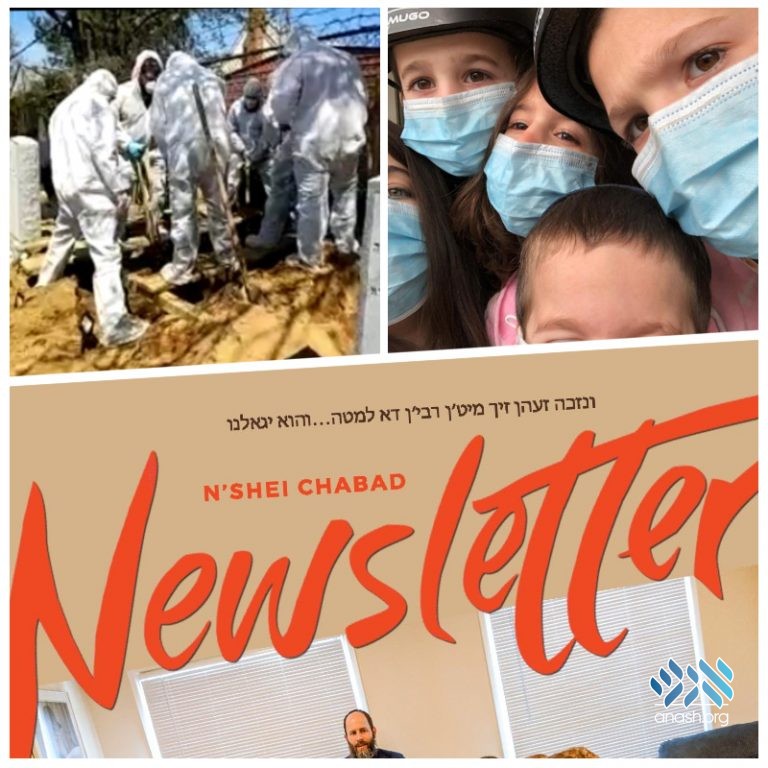 Thanks to generous donors and friends, the N’shei Chabad Newsletter was able to publish its Tammuz issue despite having lost 75% of its advertising revenue.

The Tammuz issue of the N’shei Chabad Newsletter is going to print! This is a miracle brought about by generous friends, because the NCN (like most publications) lost 75% of its ads during the corona pandemic. But the goodness of Yidden is stronger even than the corona virus.

If you were one of the NCN’s donors, all of Lubavitch (as well as Jewish women of all types and stripes) thanks you, because we need the NCN now more than ever. If you weren’t, and you would like to be, please visit https://nsheichabadnewsletter.com/ to watch a video about the fundraising effort, or to donate.

“At a recent staff meeting, we were really concerned about how to cover our costs,” said Mrs. Esther Heber, business manager of the NCN. “With so many businesses and camps now unable to advertise, we wondered what the future held for us.

“We wrote a pan and asked some longtime supporters of ours to read it aloud at the Ohel on Lag B’Omer. Then we called, emailed, and whatsapped our readers and friends. Baruch Hashem the response is heartwarming and generous,” she said.

Senior editor Mrs. Rishe Deitsch added, “It’s especially encouraging for us to realize how much people want the NCN to survive this pandemic.  It seems the NCN is an important source of chizuk and information for them. I’m so glad about that.”

So, yes, the Tammuz issue is going to print. Don’t miss out! Subscribe today https://nsheichabadnewsletter.com/subscribe/ and get it in the mail!

Oh, you want to know what’s in it? Okay, here’s a partial list:

Tobi Hendel, wife/mother/grandmother/shlucha, talks about how to keep peace in the family after the children are grown. Grandparents want peace; they desperately want to see their children and grandchildren getting along and helping one another, but sometimes unwittingly they cause resentment by sharing with one child, for example, what they bought for another child…

Raizel Gordon spoke eloquently at the Bais Rivkah reunion which took place recently, and she received a call from the NCN that same night asking for the speech. It can only be read in the upcoming NCN!

Is a tuna melt okay according to halachah? Can we cook fish with dairy in one dish? Rabbi Nachman Wilhelm addresses this in the Tammuz issue halachah column.

People have become increasingly sensitized to insults of all kinds. Is this a good thing or a bad thing? Can we learn to respond to spoken insults in a way that decreases the likelihood of them happening again, and brings true peace? Izzy Kalman, a valuable and frequent contributor to the N’shei Chabad Newsletter, explains how in the Tammuz issue.

Sylvia Kravitz, at close to 100, spoke to the N’shei Chabad Newsletter about her experiences as a J-Net partner with Hindel Levitin. Meet her in the new NCN. Sylvia has passed away but her legacy of loving to learn Torah lives on and inspires us still. Together, let’s bentch J-Net’s founder, Rabbi Yehuda Dukes (Chaim Shneur  Zalman Yehuda ben Hinda Yocheved) with a refuah sheleimah ukrovah.

Popular columnist Rabbi Shais Taub talks about Gimmel Tammuz, lighting a fire under us to do with our whole hearts what the Rebbe expects of us.

Chassi Rivkin explains why standardizing the title of “kallah teacher” is for everyone’s benefit.

All this and more in the next issue. Baruch Hashem, the N’shei Chabad Newsletter, in  print since 1962, lives on.

“We thank you for your support and we look forward to providing a superior product!” concludes Mrs. Heber.