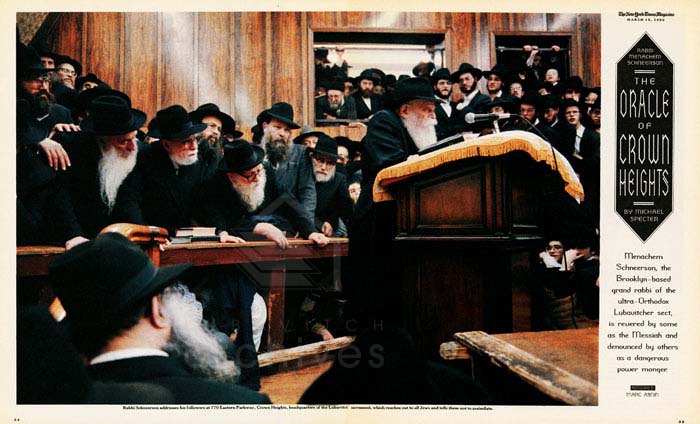 Award-winning photojournalist Marc Asnin often says he considers the photo the greatest one of his career. He’s now using it to help the less fortunate.

For the first time New York Times Magazine photo of the Rebbe will be for sale to assist underprivileged children of New York City.

The award-winning photojournalist Marc Asnin, has photographed for New York Times Magazine, Time Magazine, Reader’s Digest and may other prominent magazines, historical events and important people. Yet, the photographer takes great pride in his Rebbe photo. “I consider the photo the greatest one of my career,” he often says.

In 1992 Asnin was chosen to photograph the New York Times Magazine cover story, marking the Rebbe’s ninetieth birthday. He spent nearly two months in Crown Heights photographing the Rebbe and the happenings in the community. “When I began the assignment,” he recalls, “I knew little of the Rebbe’s global impact. Despite being one of the most famous rabbis of the generation, the Rebbe was approachable, and I was able to photograph with ease.”

Over that time, he photographed tens of thousands of photos (which he has donated to Lubavitch Archives, who is working on publishing a book).

The the New York Times Magazine chose as a double spread, his iconic photo which was photographed on the yahrtzeit of the Rebbetzin. “The Rebbe was facing east praying evening services,” he says, “All of a sudden the entire room was moving. Eventually everything stopped and I was on top, not the best place to capture a photograph, which I believe should always be done intimately and close-up. There was this one guy who told me to jump.”

Asnin was shocked at the idea of jumping in a shul, but after some egging on, he did it anyway. “At that moment I perceived the tremendous passion and depth of belief innate to Chabad ideals. No one was simply a spectator. The energy in 770 was palpable. The sparse furniture in the synagogue was irrelevant beside the pulsating spirituality that emerged during a Hassidic gathering.”

That was the moment that he took, what he calls, “an incredible” photo of the Rebbe talking on the dais”. Though I did not know what the Rebbe was saying, I felt deeply connected. The captured moment exudes passion and spirituality. This special photo has the mark of a Dutch painting, and hangs in many homes, Jewish and non-Jewish alike.”

Years later, on the tenth anniversary of the 1992, the magazine unprecedentedly reprinted that photo of the Rebbe. In addition, when the New York Times Magazine published a commemorative photography book of their best pictures, the photo of the Rebbe, is the religious one they chose to use.

He says that in such times as ours, when we are locked in our, we need to think about others less fortunate than us. “During those few weeks,” he says, “that I was photographing the Rebbe I felt something I never felt from other Jews in my life: unconditional love.”

Over the years he has made that unconditional love a part of his daily life, which includes assisting with NYSALT with assisting the less fortunate. Asnin concludes: “I hope that the energy and love in that room that day emanates throughout the world tough times and helps keep the mission of NYC SALT thriving.”

The photo is available on Prints by NYC SALT in five different sizes.