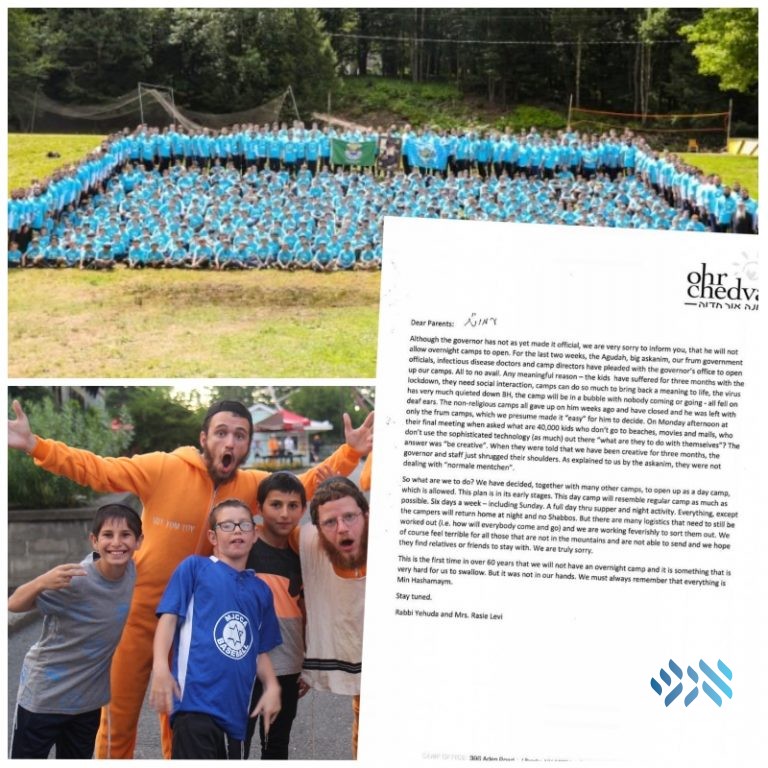 Although no official decision has been announced on the status of overnight camps in New York, some frum camps have begun sending out letters saying that Gov. Cuomo will not be allowing them to open. No word yet from CGI Parksville or Camp Emunah.

Although no official decision has been announced on the status of overnight camps in New York, some frum camps have begun sending out letters saying that Gov. Andrew Cuomo will not be allowing them to open.

In one such letter, obtained by Anash.org, the directors of an overnight camp in Upstate New York wrote that despite all efforts, the camp will be forced to remain shut for the summer.

“Although the governor has not as yet made it official, we are very sorry to inform you, that he will not allow overnight camps to open. For the last two weeks, the Agudah, big askanim, our frum government officials, infectious disease doctors and camp directors have pleaded with the governor’s office to open up our camps. All to no avail,” said the letter, sent by Camp Chedvah to parents.

“The non-religious camps all gave up on him weeks ago and have closed and he was left with only the frum camps, which we presume made it ‘easy’ for him to decide.

“On Monday afternoon at their final meeting when asked what are 40,000 kids who don’t go to beaches, movies and malls, who don’t use the sophisticated technology (as much) out there ‘what are they to do with themselves?’ The answer was ‘be creative’. When they were told that we have been creative for three months, the governor and staff just shrugged their shoulders. As explained to us by the askanim, they were not dealing with ‘normale mentchen’,” they wrote.

No word yet has been heard from Camp Gan Yisroel in Parksville, New York, the flagship Gan Yisroel camp. Neither has Camp Emunah girls camp sent out any message.

Anash.org will continue to keep the community updated with any developments.