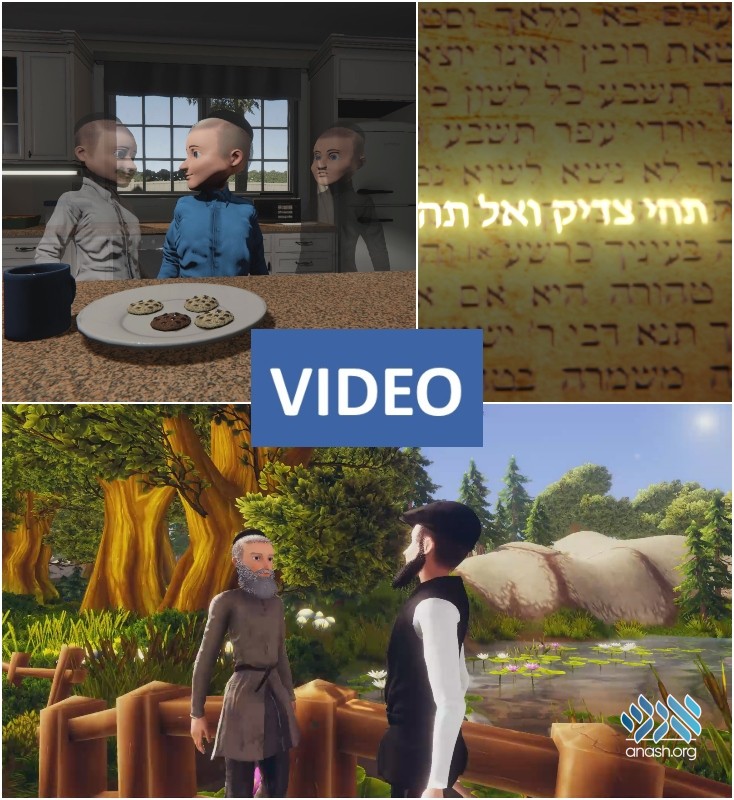 A new animated video series for children was released with with Middos Tovos from Gemara, Tales of Tzaddikim and Modern-Day Examples.

“Team Tzaddikim” is for every kid who wants to reveal their natural Torah-powers and Mitzvah-abilities – no gizmos, gadgets, hats, time-travel, coats, capes or magical yarmulkas required!

With chassidishe lessons absorbed visually and the choice of download or streaming, parents can now enhance their kid(s) chinuch and chassidishkeit with the power of animated videos. All videos are reviewed and Rabbinically approved.

BS’D, this new series is created by Torah Luminations, the producers of the popular animated series known as “Living with Tzaddikim” with videos such as “The Maharal and Golem of Prague”, “The Guest Gets the Best” and “The King’s Wise Son”, etc., this new “Team Tzaddikim” series represents the next level in animation and chinuch for today’s kids.

“Part of the feedback we received from parents and especially Anash” says Avrahom-Moishe Erlenwein, a co-founder and Producer at Torah Luminations, “is that the classic, chassidishe stories are foundational gems but there needs to be a way for kids of this generation to be able to relate to them. Boruch Hashem, we are not living in the times of persecution, expulsions, pogroms and dying al kiddush Hashem.”

These Team Tzaddikim episodes quote a Gemara on middos tovos, beautifully animates an example from “Stories of Tzaddikim” or “Talks and Tales” to explain that quote, and then shows how these lessons can be applied today by following the modern-day adventures of a group of Cheder boys. These Cheder boys are regular kids who are caught between the impulses of their Yetzer Hara and Yetzer Tov but want to live the chassidishe values they learn from their Gemara Rebbe.

“Another advantage of this new series is that is takes the fundamental concepts such as the Yetzer Hara, Yetzer Tov, Beis Din Shel Maalah, lights generated in Shomayim by Mitzvos, tricks by the Satan, etc. that are so often taught but remain abstract for kids, and brings them down into practical, day-to-day living. These episodes make Yiddishkeit real for kids.”

These boys are led by their Gemara Rebbe to spread the light of Torah, Mitzvos and Middos Tovos to outwit the Satan and his Mazikim. Girls and boys can learn the tips and tricks to bring out their very best as well as to never be fooled by their Yetzer Hara, the Satan or his helpers. These episodes explicitly encourage and create opportunities for families to discuss by the dinner or Shabbos table, the rich Torah lessons that are so vividly portrayed.

While we are still in the glow of Shavous and about to enter the “Three Weeks”, these themes are highlighted in the new Team Tzaddikim, Episode 3 entitled “Always Remember Hashem”. This 30 minute, animated video was just released Rosh Chodesh Aleph as the third installment in the Team Tzaddikim monthly series.

This episode shows the modern-day, animated Gemara Rebbe character in Team Tzaddikim, Rabbi Eisenberg, quoting an interesting Gemara (Nedarim 81a) as the basis for this month’s middos tovos challenge for Team Tzaddikim. This brief Gemara quote discusses one of the reasons that caused the chorban Bayis Rishon:

Even though the Bnei Yisroel were learning Torah, they began to forget the “Nosain HaTorah”.

Rabbi Eisenberg’s talmidim ask “Why would not saying Birchas HaTorah before learning cause the Chorban?” and “How is it possible to learn Torah but forget Hashem?” To answer this and based on “Talks and Tales” Volume 15, pages 9-11 “What’s in a Word?”, Rabbi Eisenberg introduces us to “Yankel”. Yankel is a good Jew who is an baal esek, baal tzedukkah and machnas orech. The challenge is, Yankel thinks all his success is from his “chush” in business and how smart he is; Yankel has forgotten that it is the “birchas Hayavah taashir”. This has caused quite a shturim in the Beis Din Shel Maalah. We get to see the Beis Din Shel Maalah, the court case of the Satan’s charges against Yankel vs. the defense by the Melochim created from Yankel’s mitzvos and the decision by the Beis Din to test Yankel for the psak if he is deserving to keep his wealth.

What will happen with Yankel? Will he pass his test? Guest appearance in this episode by Eliyahu HaNavi as the elderly Yid “Eli” who travels with Yankel as he is on his way to the local market fair.

As a personal touch, Torah Luminations offers that if there are any questions on how to get access, they provide email or phone support as well as short, “How To” videos on their website TorahLuminations.com.

Along with access to the new, Team Tzaddikim series, kids will have access to all 12 videos of the “Living with Tzaddikim” series.

For more information or to get access, please visit TorahLuminations.com, email info@torahluminations.com or call toll free 1.833.867.2458