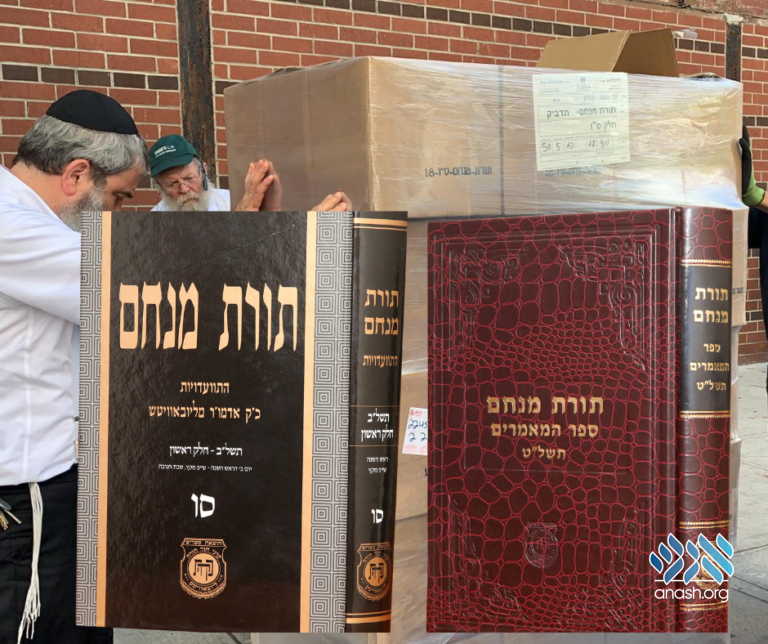 In recent years, a custom has become prevalent among Anash: The study of the kvius – a year of Sichos and Maamarim that coincides with the set-up of this year’s calendar. The Rebbe’s Farbrengens often open with an explanation of the parsha, date of the month, and also the connection between the two, and therefore, those farbrengens have a special relevance when the kvius recurs.

In honor of the new upcoming year, 5780, two new Seforim of this year’s kvius have been published:

According to the team at Lahak Hanachos, headed by Rabbi Chaim Shaul Brook, they have been fully invested in printing the Sichos of 5732 over recent months, but a special effort was made to publish this Sefer Maamarim as well, in honor of its forty year anniversary and to encourage the study of the Maamarim of the kvius.

In other news from Lahak, thousands of new sets of Sefer Hamaamarim are making their way towards the distribution points in the United States and Eretz Yisrael, for all those who participated in the sale in honor of Gimmel Tammuz – 25 Years.

The set of twenty volumes, spanning twenty years of Maamarim, was offered for an unprecedented discount price to ensure that every Chabad home, Shul and Yeshivah has the Rebbe’s maamarim, in a clear, beautiful typeset available for study.

The final round of the sale has begun this Sunday, and will conclude on 15 Elul. The sets will be available on Wednesday, Chai Elul, at the distribution points in Crown Heights and Kfar Chabad. Delivery options are also available in Eretz Yisrael and the United States.

Don’t delay! Order your set now (or surprise your loved one with a Rosh Hashanah gift…)

The new Seforim, Toras Menachem vol. 66 and Sefer Maamarim 5739, are available for purchase on Lahak’s website – www.lahak.org/sale, operated with dedication by the staff of Chabad.org, a division of the Chabad-Lubavitch Media Center headed by Rabbi Zalman Shmotkin, most notably Rabbi Meir Simcha Kagan, who spends endless hours providing his professional input for the hafotzo of the Rebbe’s Sichos and Maamarim throughout the year.