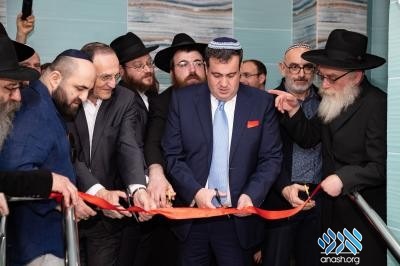 The Jewish community of Karaganda, Kazakhstan, gathered to celebrate the opening of a newly constructed state-of-the-art Mikva.

Rabbi Asher Tumarkin, the Rabbi of Karaganda and his wife Rachel devoted themselves tirelessly to bring this project to success.

The event was attended by distinguished guests from around the world. Philanthropist Mr. Emmanuel Grinshpun dedicated the Mikva in honor of his beloved father Israel. The Keren Hamikvaos foundation graciously assisted financially as well as provided Halachic and technical guidance. Architect Rabbi Shmuel Levin of Israel – a specialist in building Mikvaosensured the beauty and decoration of the Mikva.

Donations were made by many members of the Jewish community of Kazakhstan and around the world.

During the communist regime, many Jews were exiled to Karaganda and died of starvation and frost. Among them was Mrs. Feiga Raskin and her daughter Tzivia. Her descendant, Rabbi Levi Yitzchak Matosov of France joined the celebration.

Chief Rabbi of Kazakhstan, Rabbi Yeshaye Cohen addressed the participants. “Today is the holiday of the second Passover which teaches us that it is never too late and nothing is lost”. Rabbi Cohen recounted the dark days of communism. “Tens of thousands of Jews were deported to Kazakhstan and left Karaganda because there was no Mikva. Today we proudly celebrate Karaganda’s new Mikva!” said Rabbi Cohen.

Rabbi Elchanan Cohen, Rabbi of Almaty, Kazakhstan, read a letter of the Rebbe in which the Rebbe speaks about the opening of a Mikva with blessings for success and financial participation. The original date of the letter coincided with the date of the opening of the new Mikva.

Rabbi Shmuel Karnoach, Rabbi of Nur Sultan, thanked the supporters and told the story of the events which led to establishing a community in Karaganda and the construction of the new Mikva.

Israeli Ambassador Mrs. Liat Vakselman traveled from the city of Nur-Sultan to join in the ceremony and congratulated the community on the achievement of opening a new beautiful Mikva.

Distinguished guests and rabbis participated in the ribbon cutting ceremony, which was followed by an elegant reception and bar.

The Karaganda center was established by Philanthropist Alexander Machkevitch to honor the memory of his parents. Mr. Machkevitch is a proud partner of Kazakshstan activities, helping Kazakstan Jewry all year round.