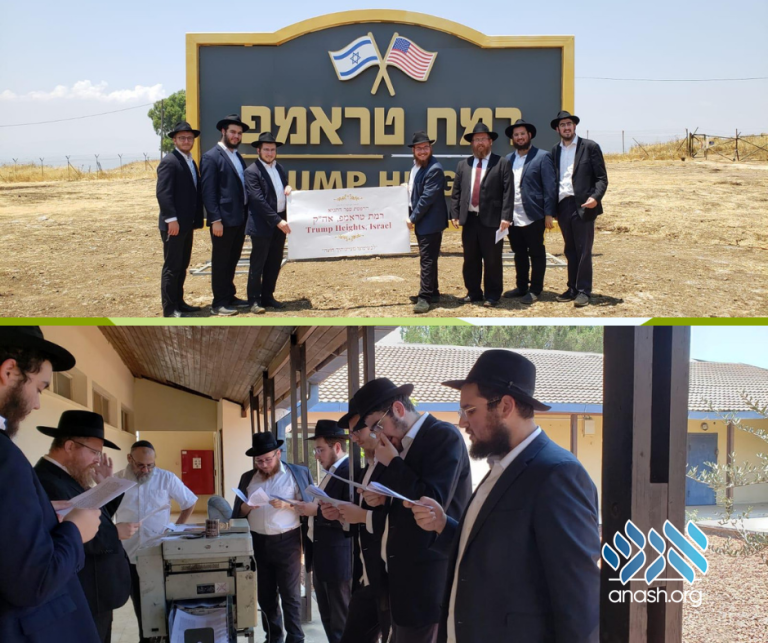 The news of President Trump’s recognition of the Golan Heights as Israeli territory and the Israeli government’s subsequent founding of a new neighborhood in the Golan has dominated the news media. What has not made the news however, is a campaign of another sort for the welfare of the Golan and specifically the new neighborhood.

When the announcement of the founding of Trump Heights reached Chabad students finishing their year of yeshiva studies in Yeshivas Tzeirei Hashluchim Tzfat, one thing came to mind – Print a Tanya. In 1978 the Rebbe initiated a campaign to print the Tanya – the seminal work of Chabad Philosophy – in every corner of the globe.

The founder of Chassidus, the Ba’al Shem Tov, taught that when the “wellsprings of Chassidic teaching” reach the farthermost areas, Moshiach will be ready to come. The Rebbe explained, that the printing of Tanya in a place has a tremendous impact on that place, bringing increased spiritual awareness to the people living there.

Since the 1970s Chabad Shluchim and individuals have taken up the Rebbe’s call and Tanyas have been printed in thousands of locations, some as remote as Trinidad and recently even in the Arab statelet of Qatar.
To make the printing in the new neighborhood a reality, the students reached out to Rabbi Hertzel who oversees Chabad’s activities in Ramat HaGolan.

Working together and within a very short time, the entire operation was set up. This Sunday, surrounded by enthusiastic local residents and the vast hills of the Golan Heights, 100 crisp copies of the Tanya rolled off the press in Ramat Trump.

The Tanyas will be distributed free to the local residents while a leather-bound copy of this unique Tanya have been produced to be presented to the Hon. Mr David M. Freedman, the Ambassador of the United States to Israel. May this incredible endeavor bring much peace and blessing to Israel and its inhabitants.