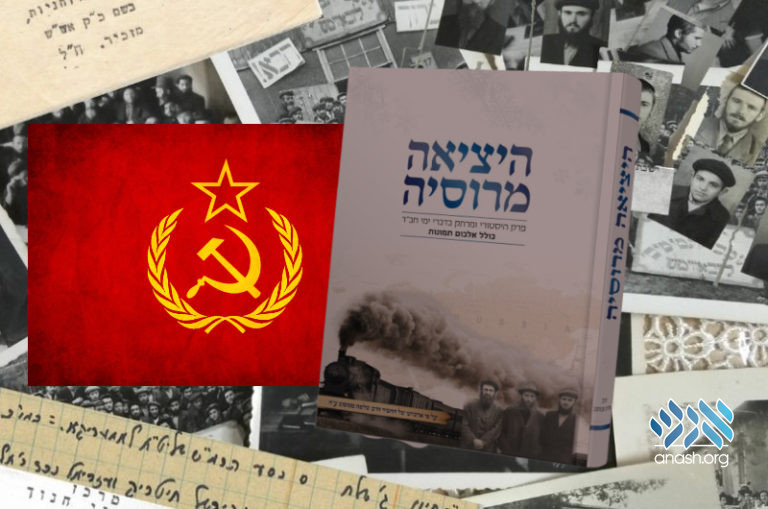 A new book – “היציאה מרוסיה” – details the Chassidim’s escape from the Soviet Union. It features hundreds of photos and documents from the archive of shliach Rabbi Shlomo Matusov.

In honor of the recent kinus hashluchim a new treasure has been revealed to the public. The book “היציאה מרוסיה” was recently published and is available for purchase. It contains never before letters, documents and photos from the archive of Moroccan shliach Rabbi Shlomo Matusov, a”h, who had the zechus to be the menahel of the Yeshiva Tomchei Tmimim in Samarkand, as well as the assistant menahel in the DP (displaced persons) camp of Pocking, Germany, where most of the Lubavitcher families arrived after the war.

The book documents a very important chapter in Lubavitch history – from the “great escape” from the Soviet Union to Lvov, through the period in Pocking and similar camps, until the transition to France and Eretz Yisroel. Many documents and photos highlight the connection that Chassidim in the camps maintained with the Frierdiker Rebbe and the Rebbe. New light is also shed on Rebbetzin Chana and her writings and descriptions of Chassidishe life in the DP camps and such personalities such as Reb Avrohom Elya Plotkin, Reb Nissen Nemanov, Reb Peretz Mochkin, Reb Yisroel (Levin) Neveler, Reb Zalman Shimon Dvorkin, and others and their work on behalf of Chassidim in the camps.

Rabbi Eli Matusov, son of Reb Shlomo, himself an accomplished author and mechaber seforim and well-versed in the history of Chabad Chassidus throughout the generations, is the editor, with the writing and research by Schneur Zalman Berger, who has published many biographies of Chassidim.

In recent years, the two have collaborated on bringing to light the escape from the Soviet Union, based on the writings of Reb Shlomo Matusof, together with locating those now-elderly people who made the escape and stayed in the DP camps. In addition to first-person interviews, much research has been made to find photos and documents and to add them to to the Matusov archive. The result of this work is a fascinating yet easy read of Chassidishe life after the Holocaust.

Reb Eli Matusov describes an amazing revelation made in his father’s “treasures:”

“In my father’s archives, we found a simple workbook which contained something very precious: a diary of the travels of chassidim in Pocking, where my father describes every move that happened in Pocking, from when they began to leave the camp until one year later. The diary contains many issues, including: chassidim that arrived and left, letters sent to the Frierdiker Rebbe, funding that was received, and more.

It seems apparent from the large archive that Reb Shlomo Matusov kept, that he was very close to the mashpia and menahel Reb Nissen, and was naturally very involved in all the goings-on in the yeshiva there. It would seem that the booklet was diary was kept in order to report to the Frierdiker Rebbe and the Rebbe on every detail of what was going on with chassidim after their escape from Russia and the subsequent settling in France. Transcripts and photos from the diary are published in the book and will definitely be a great point of interest with readers.

Some 200 rare photos, many being publicized for the first time, create a beautiful and historic album that opens a window into the lives of chassidim in those turbulent times. R’ Schneur Zalman Berger excitedly speaks about that old envelope in the Matusov archives contained many original passport photos of chassidim of those days, young and old, many of whom have passed already, but many that are still with us today.

In addition to the above, original photos that depict life in the DP camps, including the yeshiva and chassidishe gatherings, as well as the transition period to France are also included in the book.

Time had taken its toll on some of the photos, which necessitated a professional graphic artist who could restore them to their former glory and make suitable for publication. Much thanks to Boaz Sharon, a graphic artist and restorer second to none, who put in much time and effort in these photos and in the entire book. The fruits of his labor will be visible to all with the arrival of the book at stores soon, both in Eretz Yisroel and in the United States.