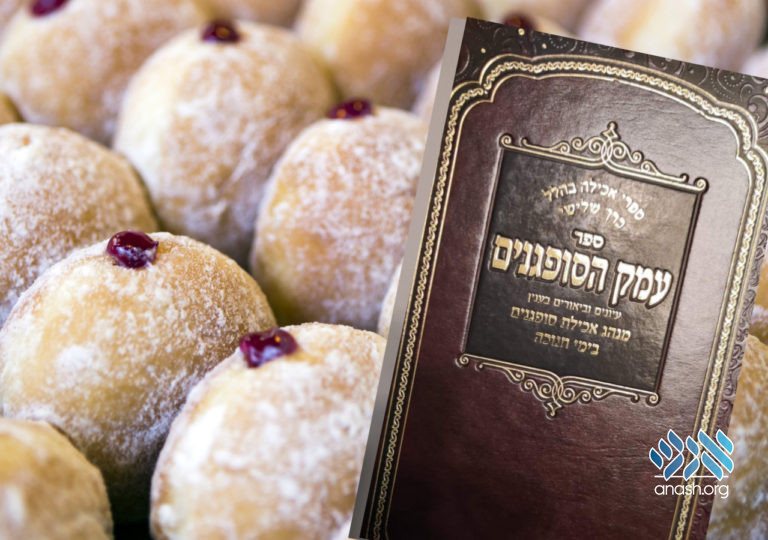 A new 400-page sefer עמק הסופגנים has been published for Chanukah on the minhag of eating donuts on Chanukah. The sefer is written by Rav Reuvein Shwartz of Brooklyn, NY and has haskamos of the Chevron Rosh Yeshiva Harav Dovid Cohen and other Roshei Yeshivos.

Every once in a while we receive a book in the library that is so unusual that I feel compelled to share it with the world. I am referring to the publication of Sefer Emek HaSufganim (lit. The Valley of the Donuts) by Rabbi Reuven Schwartz. You may be asking yourself, “Where is this valley? Someone show me the way!” But the word “emek” – “valley” here really means “depth.” So perhaps the better translation of the title would be The Depth of the Donuts. Now you may be asking, “What’s so deep about donuts?” Well, hold your breath and let us dunk into this new book and find out.

There is a very old custom for Jews to eat donuts on Chanukah. One of the oldest sources for this is Rabbi Maimon, the father of the Rambam, who mentions the custom to eat donuts on Chanukah because they are fried in oil, which recalls the miracle of the Menorah. R. Schwartz cites or suggests several other explanations for the custom. I’ll just mention two. Could donuts be the levivot that Tamar made for Amnon (Shmuel II 13:8-9) and is there some connection to Chanukah? Or could donuts be a stand-in for the spiritual food-stuff known as manna that fell in the desert?

But, now we come to the bulk of the book: what are the legal ramifications of eating donuts on Chanukah? There are many. Let’s explore a few.

1) Is it incumbent upon every individual to eat donuts on Chanukah?

On the one hand, R. Maimon, when he mentions this custom, stresses how important it is not to treat any custom lightly! So it would seem that one should eat the donuts. On the other hand, R. Shternbuch (Moadim u-Zmanim 8:148) cites some authorities who were unsure if you should mention Chanukah when you make an ‘Al ha-Michyah (the blessing after eating things like donuts) so they actually avoided eating donuts. R. Shternbuch suggests that the source for eating potato latkes is as a substitute for donuts! So maybe you shouldn’t eat the donuts. However, R. Shternbuch points out that we do not follow those authorities. Moreover, the Rambam (Hilchot Chanukah 4:12) says that one is supposed to add praise and thanksgiving to Hashem on Chanukah, beyond the lighting of candles and recitation of Hallel. According to this, one should eat the donuts because they recall the miracle of the oil and thereby add praise to Hashem.

2) When is the time to eat the donuts?

According to the Meiri (Taanit 12a) the holidays that were instituted in Megilat Taanit (a list of holidays from the Second Temple) begin at night. However, the Minchat Chinuch (301:8) argues that they only begin during the day. The Gemara (Rosh HaShanah 18b) teaches that Chanukah was one of the holidays instituted in Megilat Taanit, so it would seem to be a dispute whether the night of Chanukah is considered a festival. According to the Minchat Chinuch one should only eat donuts during the day. However, this is untenable, as we all know we light the Chanukah candles at night, so obviously the night is part of the festival! R. Schwartz has a lengthy and erudite discussion about the difference between Chanukah and the other Second Temple holidays and attempts to conceptualize why the nights of Chanukah are not the same as the nights of the others. But in conclusion- you should eat donuts day and night. Hmm… maybe I should re-phrase that last line.

3) What bracha are donuts?

This is the biggest section of the book. There is a major dispute between Rabbenu Tam and the Ramban how to define the difference between “bread” and “baked goods.” Does it all depend on the “baking” or on the consistency of the dough or both. It’s complicated and donuts are right in the jelly-filled center of it all! Donuts are usually made with a thick dough, like bread, but donuts are not baked. They are fried. Some types of frying might be considered the halakhic equivalent of baking, but then again they might not be and most frying is considered like cooking. So are donuts ha-motzi or  mezonot? Do you wash and  bentsch on them or just say ‘Al hamichyah? Do you have to take challah from donuts? Can you make dairy donuts? Are donuts subject to the prohibition of bishul akum or pat akum or maybe neither? Can you dunk your donut in hot chicken soup on Shabbat? (Admit it- we’ve all wondered about that last one).

At this point your head may be spinning like a dreidel and you might be second-guessing every donut you ever ate. Don’t! (or do I mean donut?). Remember the verse:  “Yea, though I walk through the valley of the shadow of donuts, I will fear no evil.” There’s nothing to fear here, because this sefer has haskamot! To be fair some of them were written for earlier works by the author, but R. Yitzchak Zilberstein offers a very hearty approbation stating that instead of eating donuts we can now bite into the Torah of donuts thereby countering the attempts of the Greeks le-hashkicham toratecha – to cause the Jewish people to forget Hashem’s Torah.

These are just a few examples of some of the unusual and interesting discussions covered in this new volume. It does seem a little funny at first, but there are actual, serious halakhic issues covered in this book that are quite scholarly and worthwhile. At any rate, it’s definitely something to chew on this Chanukah. (Source: Torah Musings)