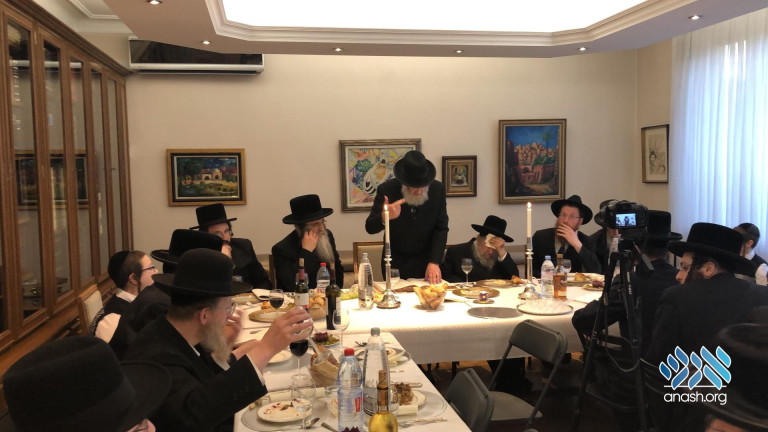 A small and private affair was hosted Monday in honor of Rav Dovid Moshe Lieberman, rov of the Shomrei HaDas kehillah in Antwerp, in the home of his chavrusa, Reb Sholom Elyovics. He and his Rebbetzin were gracious enough to host a seudah for a siyum haShas that Reb Sholom and his chavrusa the rov just made. Among the notables was Rav Ahron Schiff, rov of the Machzikei Hadas kehillah in Antwerp. Now, it isn’t out of the ordinary for a rov to finish shas, but it is unique if the rov can no longer see.

For several years now Rav Lieberman has been slowly losing his eyesight, r”l. Today he can no longer see. But that hasn’t kept him from maintaining his schedule of learning, and it surely hasn’t kept him from his rabbinic duties. The rov is still very much a sought after speaker at a variety of events, at home as well as abroad. He records a weekly dvar torah on the parsha without the benefit of preparing from seforim, and visiting rabbinic dignitaries make sure to pay him a visit at his home.

In introducing Rav Lieberman, his host Reb Sholom mentioned how honored he was to merit to have the rov’s siyum hashas be hosted in his home and to hear him speak. “I cannot say that I wish to be mechabed (honor) the rov to share words of brocho and Torah; instead, I am mechubad – honored to have the rov grace our home for this seudas mitzvah and to hear him speak,” he said. Rav Lieberman went on to bring a story of the Alter Rebbe from when he was still a colleague of Reb Mendelle of Horodok (Vitebsk) and to tie it into this week’s parsha and the concept of Bechukosai Teileichu, constantly making strides in Torah and Mitzvos. (We bring you his speech in its entirety.)

Rav Lieberman was talmid in the famed Heide Yeshiva in Belgium before World War II, the youngest boy ever to get accepted at that yeshiva. In Paris during WWII he was welcomed into the yeshiva and home of Reb Zalman Schneersohn, where he and many other bochurim were introduced to the Rebbe and to chassidus. He later traveled to New York, where he married his Rebbetzin Chaya, a”h, the daughter of Reb Yudel Chitrik, a”h. Over the years he was a rov in Chicago, as well as for many years Principal of the Beis Yehuda Schools in Detroit.