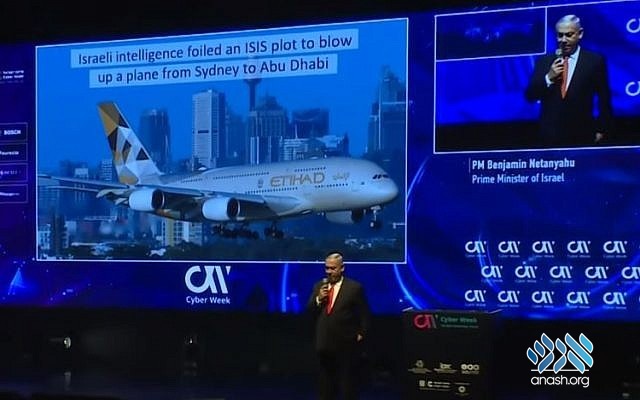 Islamic State terrorists planned to blow up an airplane in mid-air– but the plot was foiled by Israeli cyberexperts, Prime Minister Binyamin Netanyahu said at a cybersecurity conference at Tel Aviv University Wednesday. Israel, he said, was at the forefront of providing support to governments around the world in cyber-security issues. “This is a very complicated issue,” Netanyahu said, referring to the difficulty in preventing cyberattacks.

Netanyahu spoke before thousands of cybersecurity experts, corporate and government officials, defense experts and others who gathered in Tel Aviv for an annual conference on cybersecurity. Among those attending and speaking at the event were Washington DC Mayor Muriel E. Bowser, Christopher C. Krebs, Director, Cybersecurity and Infrastructure Security Agency (CISA) of the Department of Homeland Security (DHS), former U.S. Senator Joe Lieberman, US Federal Trade Commissioner Rohit Chopra, Shinichi Urakawa of Sompo Japan Nipponkoa Insurance, and many others.

The plot to blow up a plane was one of dozens of Islamic State-sponsored terror attempts, Netanyahu said. The flight in question was one between Sydney and Abu-Dhabi, and Israel used intelligence from close examination of online communications and activities to discover and thwart the plot. And there were many similar incidents, he said. Although he could not share details, Netanyahu said that there were as many as “fifty times more incidents” that Israel has foiled. The Sydney flight incident was reported in the media, Netanyahu said, which was why he was mentioning it.

Israel is working with governments all over the world on this, Netanyahu said. “We’re encouraging international associations, and we have today unbelievable cooperation first with our great and irreplaceable ally – the U.S., we’re collaborating on cybersecurity and on many other things.”

Israel is considered one of the biggest producers of cybersecurity products and services in the world; some 10% of the world market for those products and services is provided by Israeli companies, government statistics show. Much of that cybersecurity work is being done in the Be’er Sheva area. “We’re creating in the Negev this cybersecurity complex,” Netanyahu said. “There’s a cyber park, and the University right across the tracks connected to Tel Aviv. What you see is military, academic, and business institutions aligned very closely to enable this fermentation to take place.”