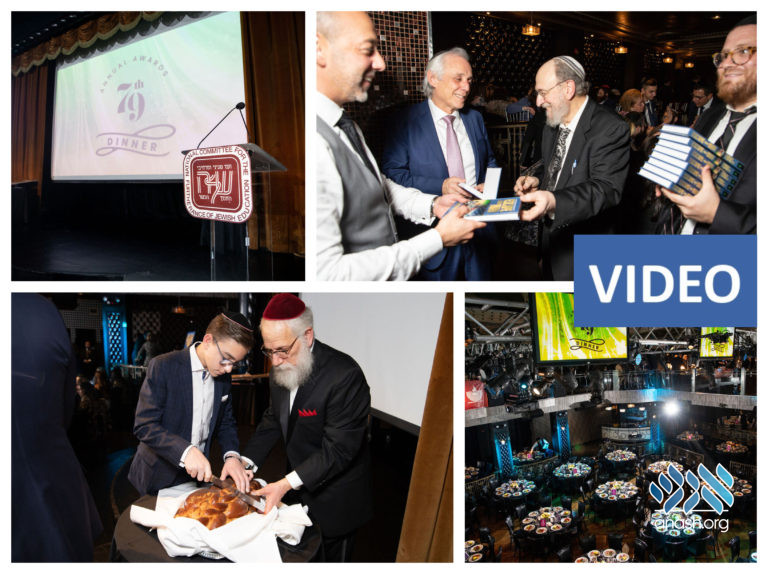 Friends and supporters of NCFJE gathered for the annual dinner, celebrating 40 years since Rabbi JJ Hecht evacuated thousands of Jewish children from Iran.

On Sunday, 19 Cheshvan, Manhattan’s Edison Ballroom was filled as hundreds of friends and supporters of the National Committee for Furtherance of Jewish Education (NCFJE) celebrated it’s gala 79th Annual Awards Dinner. The event celebrates the achievements of educators, philanthropists and public officials who have made lasting contributions to the Jewish community and the community at large.

This year’s dinner celebrated several figures from the Iranian Jewish community and marked 40 years since the Islamic Revolution forced the Jewish community to transplant its ancient heritage to the United States.

The evening began with a stirring invocation by the head of the Mekor Haim Rabbinical Court and leader of the NY Persian community,  Rabbi Eliyahu Ben Hayim. Rabbi Ben Hayim lauded the vision of the Lubavitcher Rebbe and the work of Rabbi JJ Hecht and the NCFJE in the evacuation of 3,000 Iranian children to the US in the midst of Iran’s Islamic Revolution in 1979.

Sholom Jacobs, President of NCFJE welcomed the guests and led a mi sheberach for the complete and speedy recovery of Rebbetzin Chave Hecht.

Great Neck mayor, Dr. Perdram Bral was honored with the Public Service Award for his work to revitalize the city of Great Neck, and for raising the esteem of its burgeoning Jewish community, home to many Iranian Americans Jews.

Nati Abikasis, owner of Mendy’s Restaurant in Crown Heights, was honored with the Pillar of Torah Award, for his support of the flagship of the NCFJE, the Jewish Released Time Program, for which he volunteered during his Yeshivah years. He continues to support the work of Released Time to this day.

Attorney General Letitia James was honored with the Justice Award, and spoke energetically of her roots in the Crown Heights community; and the Jewish community as a beacon of diversity and hospitality to the world.

The Paras America Heritage Award was presented to Mr. & Mrs. Masoud and Homa Lovi; and Mr. & Mrs. Moshe and Elyazadeh, who represented the thousands of Iranian Jewish children who were brought by the NCFJE from the turmoil of the Islamic Revolution to the safety of American soil.

Rabbi Sholem B. Hecht, Chairman of the NCFJE Executive Committee, presented the Moradi/Ghadamian family with the special memorial tribute which acknowledged the important work of the patriarch of the family  – Mr. Khalil Moradi, OBM.

Rabbi Sholom B. Hecht signed copies of his newly released book ‘Escape from Iran’ for attendees. Rabbi Hecht, who was the sole Jewish American activist on Iranian soil, chronicles the involvement of the Lubavitcher Rebbe; his father Rabbi Jacob J. Hecht and Chabad in the rescue of 3,000 Jewish students from the turmoil of Iran’s Islamic Revolution to American soil.

NCFJE was founded in 1941 by the Previous Lubavitcher Rebbe, Rabbi Yosef Yitzchok Schneersohn, of sainted memory, to teach Torah to public school students through the Jewish Released Time Program. Over the past 78 years, the organization launched many social welfare and Jewish education initiatives, including Camp Emunah, Hadar HaTorah, Operation Survival, among others.