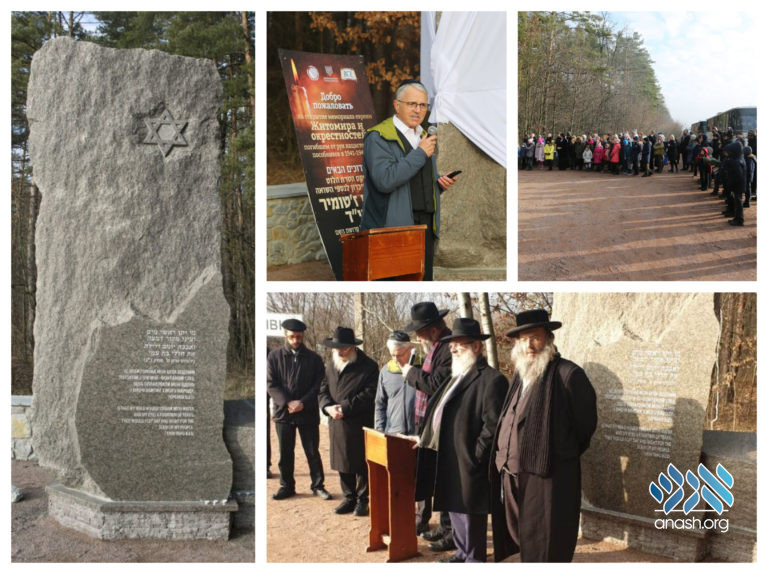 Rabbinical Center of Europe and Ohalei Tzaddikim have been working together to identify and place memorial stones on Jewish mass graves from the Holocaust. In the past week alone, they erected four.

Thousands of Jewish mass-graves exist throughout Ukraine and other parts of eastern Europe. Now, 80 years since the outbreak of World War II, the Rabbinical Center of Europe and Ohalei Tzaddikim are working together to memorialize these victims for generations to come, by erecting memorials on the graves of these kedoshim.

Over the course of this week, three monuments were unveiled at massacre sites in Ukraine that were identified after a lengthy study.

Yesterday, near Zhitomir, a memorial was opened to the Jews of Zhytomyr and the surrounding area, who died at the hands of the Nazis and their accomplices in 1941-1943.

The event was attended by Jewish community members, students of the Zhytomyr Jewish gymnasium, the general director of the Rabbinical Center of Europe, as well as project sponsor Alex Goldis.

Today, Tuesday, a similar event took place for the Jews of Hajnówka [Hachnovka] who were murdered al kiddush hashem during the war and pogroms in 1941-2.

The ceremonial unveiling of the memorial to the Jews of Hachnovka was attended by distinguished public figures, including Israeli Ambassador to Ukraine Yoel Leon, Shliach Rabbi Shaul Horowitz, the Mayor of Hanovka and the Jewish community leaders.