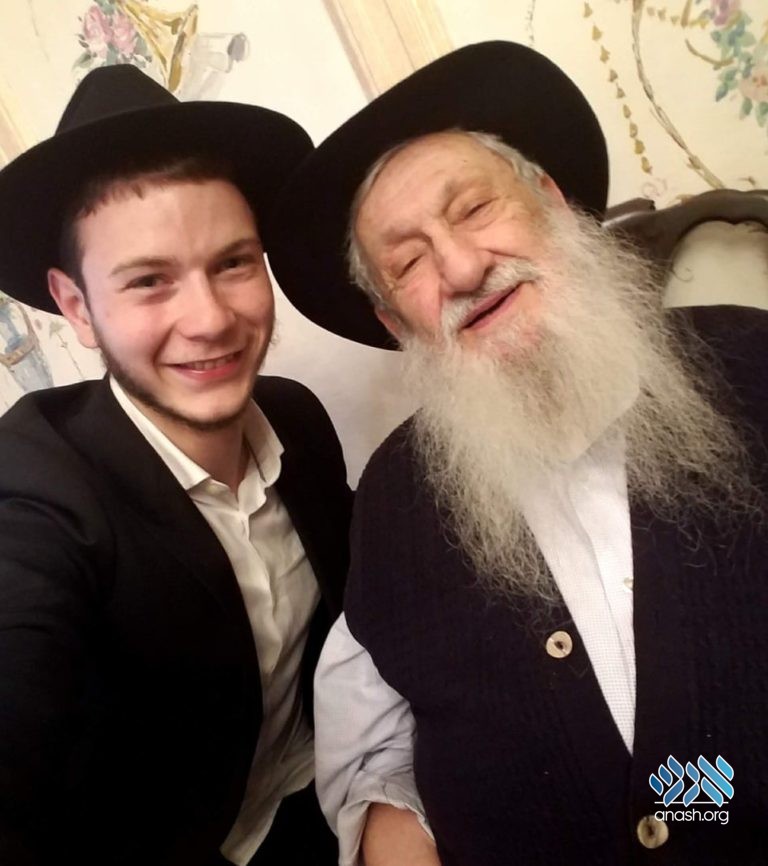 When one thinks of Avraham Aaron Rubashkin immediately his kindness and humility come to mind. Mendel Erlenwein writes about the man he grew up calling ‘Zeidy’.

When my father met Sholom Mordechai Rubashkin at the age of eighteen years old, they became instant friends. In fact, my father met my mother in Tzfat through the Rosenfeld’s, Shalom Mordechai’s sister and brother in law. They married a short time later and today have nine children and multiple grandchildren ka”h.

Once, as a bochur, my father spent a shabbos at the Rubashkin’s in Boro Park. It was just him and Mr. and Mrs. Rubashkin, yet despite the Rubashkin’s being my father’s senior by quite a few years, the age and culture differences melted away immediately and he enjoyed a beautiful and heartwarming shabbos.

He vividly recalls him and Mr. Rubashkin taking a walk Friday night, arms linked together as Mr. Rubashkin related stories of the Alter Rebbe and Chassidim of yesteryear.

When Shabbos had ended and it was time for my father to leave, Mr. Rubashkin bid him farewell and gave him a warm handshake. As my father pulled his hand back, he felt a couple of unassuming bills neatly folded that had been quietly slipped to him by his gracious host. The feeling of paternal love and generosity in the most unassuming manner remains with him till this day.

I had ordered meat for Pesach and I found myself still waiting for the order to be delivered at 11 PM Thursday night. Finally, I heard my doorbell ring. I buzzed the deliveryman in and as I waited for him to climb the four flights of stairs to my apartment, I opened my whatsapp and checked my unread status. Right as the delivery man knocked on my door, I saw the status, a picture with the three ominus letters we have been seeing much too often these days; BDE.

I was shocked. It simply could not be! He was one of the strongest, sharp witted and energetic people I know, beyond that however, to me he was almost larger than life itself, beyond a legend, he was Zaidy Rubashkin!

I say Zaidy Rubashkin knowing full well that he is not my paternal grandfather, yet to us kids he was always called Zaidy Rubashkin. He was the ultimate grandfatherly figure not only to me and my siblings, but to all us kids growing up in Postville. From giving us extra treats on Pesach to giving every kid more money then we had ever seen in our lives on Chanukah, he was loved by all who knew him.

If there was one thing we quickly learned though, it was to never (like ever) give him the slightest hint of honor or attention. There are so many instances that come to mind when he almost angrily brushed me or someone nearby off when the tiniest spotlight was put on him.

One particular time was when I was once Chazan for Shacharis on Shabbos morning in Nevel (the Rubashkin family bungalow colony). When it came time to take the Torah out to read, I brought the Torah over to him so he shouldn’t have to leave his place and walk over to me.

I quickly regretted it.

As I came over, he looked at me with a surprised look that quickly turned to shock, and with one mid-davening grunt, he let me know what a ridiculous idea it was, how could I take the Torah over to him??!!

My father recalls a fundraising dinner he and Sholom Mordechai attended at which Zaidy Rubashkin was the honoree. As is customary, the emcee gave a lengthy introduction, praising Mr. Rubashkin for his generous support of the institution. At the end of the long-winded intro, Mr. Rubashkin was called up to give the keynote address. All eyes were on him as he strode quickly to the podium, he turned to the silent crowd and leaned in to the microphone, “write a check to the yeshiva” he said strongly and clearly. He then turned around and headed back to his seat to the utter shock of the crowd and the dismay of the emcee who was sure he had at least thirty minutes to enjoy his main course.

There are those you may come across in life that try to shy away from the spotlight, but end up ensuring they receive more attention by their ‘outcry’ than they would have gotten in the first place. With Zaidy Rubashkin however, his humility was so much a natural part of him, it seemed as though he truly believed there was no thanks due to him for his unending support of every facet of jewish life and his unbounding kindness to everyone that crossed his path. To me, he is the ultimate role model of a man who has it all, sharp, successful, a wonderful family (may they live and be well), and yet he had simplicity and humility the likes of which I have never seen replicated in my life.

He was a real person, true to himself to the very core, he neither flaunted his wealth, nor hid from it as some do. Rather, he used every blessing he was given as a platform to empower others and to multiply those blessings for everyone in his life. As his grandson put it when asked if there was a certain subject in Torah that Zaidy Rubashkin especially enjoyed, he said “There are many, but he mainly was a truly kind person, and that is something you cannot learn in a book”.

What upset me most about his sudden passing, was the circumstances in which he was taken from us. It never occured to me that he might leave us, but I knew that if he ever would, it would be after 120 healthy years, surrounded by his family and escorted to his resting place by the thousands of people he helped throughout his life.

Yet, as I found myself standing in front of 770 amongst a small crowd, forced to stand six feet apart from one another by the blaring megaphones of the short tempered cops and watching the van opened by two men in full hazmat suits, yelling at the bereft family not to come close to their precious grandfather, I thought to myself that as painful as this joke of a funeral for such an esteemed man was for us, I am sure that Zaidy Rubashkin would not be fond of the pomp and ceremony that he would be given under any other circumstances. Perhaps this may be exactly what he wants.

To Zaidy Rubashkin I say, I knew you as a child who used to get kisses on the forehead and treats from you, and then as an adult whose simchas you would always make sure to be at. Even in your 90’s you left your home to come to my Sheva Brachos and always greeted me with the warmest smile, an excited hello and a kiss on the cheek. I may not have known you enough to fully appreciate your larger than life personality, but I know that you have not only brought up generations of inherent givers, whose kindness is part of their very DNA, but you have inspired legions of people from all walks of life who will continue to act on the everlasting impressions you’ve left with them.

To the amazing, unbreakable Rubashkin family, we have no words to comfort you, we cannot understand the loss you feel or the pain you are enduring. Know however, that the world is mourning together with you, it is clear as day that the apples have never fallen far from the tree and you are each a indistinguishable part of a dynasty of kindness and generosity, Zaidy Rubashkin must so proud of each of you as he watches over us from his honorable place in heaven.

All we can say is: Hamakom yinachem eschem bisoch shaar aveilei tziyon ve’yerushalayim. May we merit to see Zaidy Rubashkin again very soon with the coming of Moshiach now!

If you have any memories of Zaidy Rubashkin, please email them to zaidyrubashkin@gmail.com

The family would greatly appreciate it!