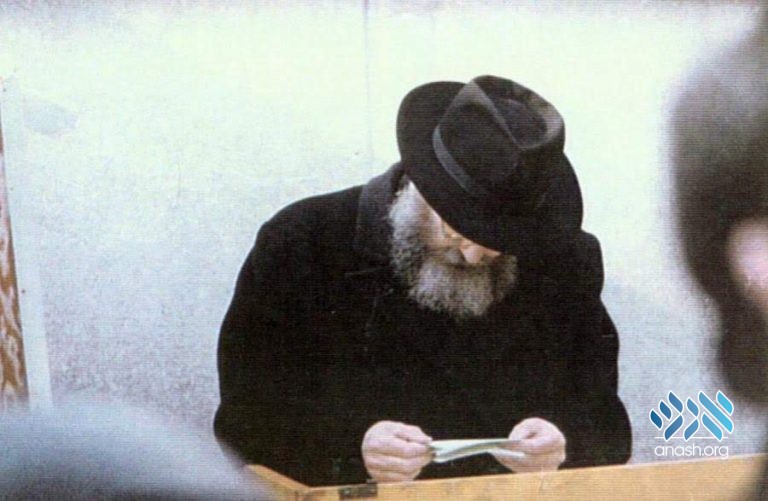 As we approach Gimmel Tammuz when many of us will be unable to be with the Rebbe, Rabbi Eliezer Zalmanov reflects on an answer he received from the Rebbe as a 6-Year-Old boy, and its pertinency today.

I was 6 years old and my family was planning a trip to Israel. My father had not seen his parents for several years, and we were going to spend a few weeks with them in Kfar Chabad, the village they lived in just outside of Tel Aviv.

This was in 1986, shortly after the Space Shuttle Challenger disaster, which, coupled with recent hijackings, especially of flights traveling to Israel, caused me to suddenly become anxious about boarding an aircraft and flying across the ocean. So my parents suggested that I write a letter to the Rebbe describing my concerns and asking the Rebbe for a blessing for a safe trip.

Growing up, we were taught that the Rebbe was always the address for all concerns in life. And in the earlier years of the Rebbe’s leadership, he would respond — sometimes at length — to each letter, with many of these responses eventually being published in the Igros Kodesh series.

But in later years, as the amount of letters the Rebbe would receive grew tremendously, most people no longer received full letters in response. Instead, the Rebbe would pen a few short words in response to each letter, and his aides would then contact the writer of the letter to convey the Rebbe’s response, word-for-word. Almost always, these responses included the phrase “Azkir al hatziyon” — I will mention your letter at the Ohel, the grave of the Previous Rebbe.

(The Rebbe would visit the resting place of his father-in-law and predecessor regularly, where he would read many of the letters he received from people around the world.)

So as a young child, I was hoping to receive a personal blessing from the Rebbe for a safe trip. However, to my dismay at the time, the only response I received was a simple “Azkir al hatziyon.”

My parents explained to me how busy the Rebbe was, and that he often told people that the mere fact that he brought the letters to the Ohel was the greatest indication that he is praying for us, and we therefore do not need to receive a full-length or even detailed response when writing to the Rebbe. If you wrote to the Rebbe, and especially if the Rebbe responded with “Azkir al hatziyon,” that was all you needed. Your request for a blessing has been received and the Rebbe is praying for you.

I think about this incident often, especially today, 26 years after the Rebbe’s passing. As Chassidim of the Rebbe, we are taught that everything we do in our lives revolves around the Rebbe; we never make any decisions in life without his blessing and input. This is true now too, when we cannot physically receive a response from the Rebbe. Even a simple “Azkir al hatziyon” is no longer forthcoming. Yet, we still continue writing to the Rebbe, we continue visiting the Ohel, and asking the Rebbe to intercede on our behalf on high. Because we know that the Rebbe is always there for us.

This is even more relevant this year, as due to the coronavirus pandemic there will be no annual pilgrimage of thousands of people visiting the Rebbe’s grave for his yahrtzeit on the 3rd of Tammuz (next Thursday, June 25). Everyone is being told to either stay at home, or come for a brief visit and not to congregate in large groups around the Ohel. The long lines of people waiting to enter the Ohel for a brief two minutes will be limited to a walking line, with no time to stop and pray.

For Chassidim, not to be able to be with your Rebbe is one of the most difficult things to come to terms with. We were raised with stories of our parents and grandparents going to extreme efforts to spend even a short time in the Rebbe’s presence. They sacrificed so much to be with the Rebbe and learn from him up close. And even with the Rebbe no longer physically with us, just being near the Rebbe, in close proximity to his resting place, provides us with the energy and connection we need to be who we are as Chassidim.

Not being able to physically be at the Ohel this year for the yahrtzeit is certainly dispiriting. Yet we are reminded that not always does our relationship with the Rebbe require an actual response. Just as in the past, the Rebbe emphasized that even when you did not receive a full letter back in response to yours, and even if all you got was a seemingly generic “Azkir al hatziyon,” the Rebbe is still praying for you.

And of course, when the Rebbe is doing all he can for us, we need to do what the Rebbe expects of us. We must commit to continue fulfilling the mission given to us by the Rebbe, to make the world a holy place and a kind place, to bring G-dliness into the world, leading to the ultimate revelation, the coming of Moshiach, when we will be reunited with the Rebbe, may it be speedily in our days!