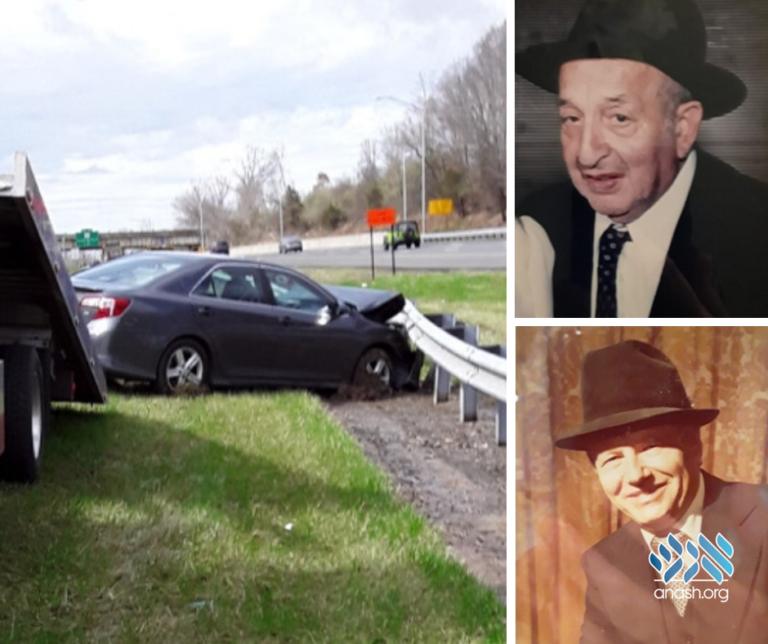 There are times when Divine providence is so stark that you cannot help but take notice.

Both my father and my wife’s father passed away more than 30 years ago.

My father-in-law, Menashe Bernath, was a simple man, a G‑d fearing Jew with the kindest heart. His mother died when he was a baby, and his step-mother forced him to sleep in the barn in the small Romanian village where they lived.

By the time he was seven, he had been sent away to a neighboring village to be apprenticed to a local grocer, yet he never became bitter. He divided his meager salary in two. Half he would send him to his step-mother; the other half he gave to the village rabbi who lived in extreme poverty.

He eventually immigrated to New York. Although he never received much of a Jewish education, his sweet prayers were legendary, as was his outsized heart, which stopped beating when he was only 62 years old.

My father, Shmuel Avrohom Abba Pollack, born in the Ukrainian mountains, was a devoted member of the Otynia Chassidic dynasty which was almost entirely wiped out by the Nazis. My father lost his first wife and three children to the Nazis, yet he had the strength to remarry my mother and begin anew in Brooklyn, where I was raised.

My father was a beloved figure in Crown Heights where he gave Talmud classes in the Empire Shtiebel (shul).

A printer by trade, he developed a warm relationship with the Lubavitcher Rebbe, whose books he would print.

After my father and father-in-law both passed away within the span of two years, their tefillin ended up in my house where they sat on a shelf undisturbed for decades.

Around two months ago, I said to myself, “These tefillin are sacred. They were used for a mitzvah for so many years, I am sure that they can still be used by someone.” I decided to send them to a scribe who inspected them both to ensure that they were in fine condition.

The day the tefillin came back from the scribe (it was a Monday), I put them in a bag and hung it up next to the front door, so that I would not forget about them.

That afternoon, around 3 p.m., I was home, which is somewhat unusual for me. I heard a knock on the door, and was greeted by a meshulach, an alms collector from Israel, who was raising money for his daughter’s forthcoming wedding. I invited him in, gave him a snack and a cold drink, and sent him on his way with a check in hand.

As I walked him to the door, he remarked that in a few weeks his son would be celebrating his bar mitzvah and he had no idea how he would find money with which to purchase a pair of tefillin. I’ve lived in this neighborhood for 40 years and many collectors have come to my door, but this is the first time I recall anyone asking for money for tefillin.

Overjoyed, I stuck my hand into the bag and handed him a pair of freshly checked tefillin for his son. Laughing and crying at the same time, he expressed his gratitude and joy over this amazing turn of events. He then confided that his sister and brother-in-law would soon be making a bar mitzvah as well, and neither did they have money for tefillin. Without further ado, I scooped out the second pair of tefillin and handed it to the man.

My only regret is that in my great excitement, I neglected to ask the tzedakah collected for his name and contact information.

The following morning my wife and I woke up early to visit our daughter who lives in Waterbury, Conn., 80 miles to the northeast of our home in Queens.

Apparently we were both more tired than we thought, and we both dozed off, awakening abruptly when we crashed into the guardrail.

The car was totaled but we walked out without a scratch. The State Trooper could not believe it when he looked at us and at the car. Never had he seen people survive such an accident with nary an injury.

I felt that it must have been connected to the tefillin. After 30 years of disuse, I finally arranged for them to be used once again, and the following morning my wife and I were saved from a terrible accident.

A friend of mine drew my attention to the following story in the Talmud, concerning a man known as Elisha “the Winged One”:

Why was he known as the Winged One? In his time, the wicked government decreed that any Jew who wore tefillin on his head would have his brain pierced. Undeterred, Elisha bravely wore tefillin in the marketplace. He once saw that he had been spotted by the government-appointed observers with his tefillin on and he ran away as fast as he could. The man caught up to him, but not before Elisha slipped the tefillin off his head and clutched it tightly in his hands. “What do you have in your hand?” asked the soldier harshly. “Oh, just the wings of a dove,” said Elisha. “Oh yeah?” sneered the stranger, “open your hands and prove it!” Left with no choice Elisha opened his palms. A miracle occurred, and the tefillin had become doves’ wings.

Why, of all objects in the world, did the tefillin become doves’ wings? The Talmud replies: Just as the wings of a dove protect it, so do the mitzvot protect the people of Israel.