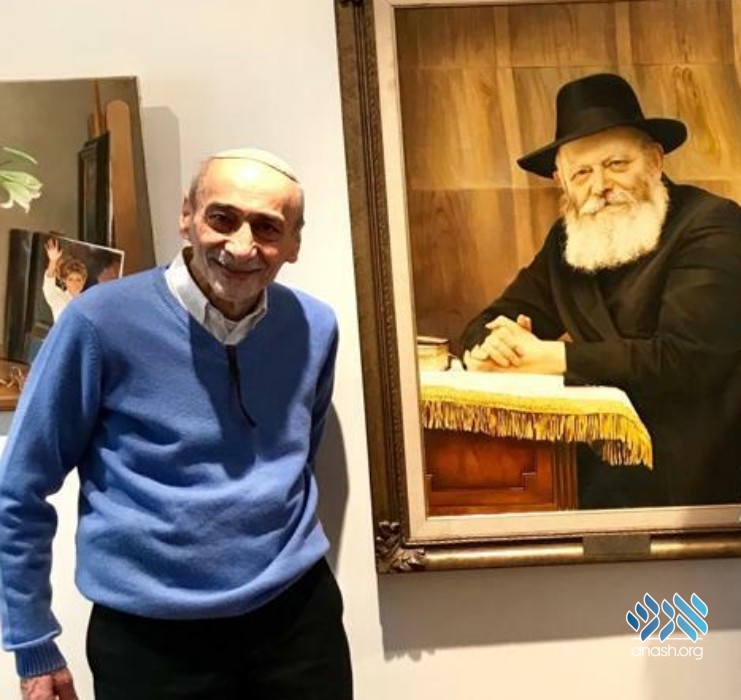 Mr. Raphael Nouril, an acclaimed Jewish artist who painted portraits of the Rebbe which the Rebbe commented on and approved, passed away Thursday, 19 Sivan, 5780.

Mr. Raphael Nouril, an acclaimed Jewish artist who painted portraits of the Rebbe which the Rebbe commented on and approved, passed away Thursday, 19 Sivan, 5780.

Born in 1940 in Tabriz, Iran, Raphael Nouril’s early promise as an artist was nurtured throughout his childhood. Raphael studied for four years under Reza Samini, an Iranian artist of rare skill and immense reputation. Under Samini’s tutelage, his artistic sensibility matured and his reputation grew.

When political unrest began in Iran, Mr. Nouril moved with his family to London at the advice of high ranking Persian military officers.

At one point Mr. Nouril decided he wanted to paint a picture of the Rebbe. In order to do that he realized he would need to become more observant in his yiddishkeit. After about 2 months of observing Shabbos, Mr. Nouril felt he was finally ready to paint the portrait of the Rebbe.

When the painting was nearly finished, he traveled to New York to see and speak to the Rebbe and complete the final touches of the painting.

They waited outside the Rebbe’s room, the portrait covered with a cloth, hoping to unveil it when the Rebbe arrived in the morning. As the Rebbe exited his car, his wife took the cloth off the portrait, and the Rebbe was immediately drawn to it.

He had planned to ask his opinion but, without any prompting, the Rebbe said, “The hands like this are prohibited … they should be like this.” And he put his right hand over his left to demonstrate. He had painted the Rebbe’s handed with his fingers intertwined with one another, something which is problematic.

Then he asked the Rebbe to comment on the face and then he looked at the face and replied, “Very good” – he said three times. And then he added, with a smile on his face, “Better than the original.”

Mr Nuriel often invited Bochurim to his home where he shared with them his encounters with the Rebbe and the history of his art.

The levaya will take place today in London at 1 PM, passing by 22 Hillcrest Avenue NW11 0EN, on the way to Eretz Yisroel.