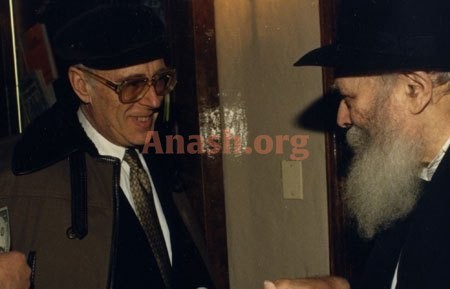 Mr. Peter Kalms, a long-time supporter of Lubavitch in the UK and a man who merited to spend many hours with the Rebbe in yechidus, passed away on Shabbos, the first day of Pesach. He was 89.

Mr. Kalms was an accountant whose connection to Lubavitch started close to 60 years ago when shliach Rabbi Faivish Vogel visited him after seeing a birth announcement in a local newspaper. From then he began a long connection to Lubavitch and spent many hours with the Rebbe in yechidus, ultimately publishing his memoirs in a book entitled “Guidance From The Rebbe.”

He was active in many Chabad projects, institutions and endeavors, in London, as well as internationally. Notably among them was the rebuilding of the Tzemach Tzedek shul in the Old City of Yerushalayim, as well as the SHAMIR, an organization that played a key role in the successful absorption of Jews arriving from the Soviet Union.

His love of the Eretz Yisroel and Yerushalayim caused him to want to leave Britain and settle in the Old City, but the Rebbe convinced him and his wife to stay in the United Kingdom and remain active on behalf of British Jewry. He remained in the UK for the rest of his life, an active member of the Lubavitch Beis Hamedrash Kingsley Way in Hampstead Garden Suburb.

Mr. Kalms was also a columnist for Chabad.org, where over his many columns he shared with his readers issues and difficulties that he discussed with the Rebbe and how they relate to everyday problems which people may encounter.

He merited to see beautiful generations, many of them shluchim in the Rebbe’s army.

The levaya in London will be today at 4pm at 2 Erskine House Homesfield, London NW11 6HN. The aron will be taken to Eretz Yisroel. The levaya there will be at the Beit Halevayot “Shamgar” in Yerushalayim at 10:00am on Tuesday.

Read an interview by Derher with Mr. Kalms A”h here