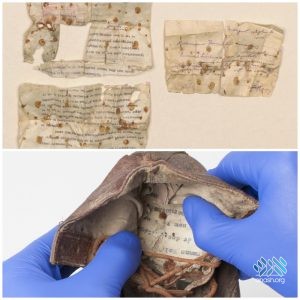 An exceptional discovery was made during conservation work on items belonging to the victims of the Auschwitz concentration camp.

An exceptional discovery was made during works to conserve the shoes belonging to the victims of the Auschwitz concentration camp, which are on display at the main exhibition at the Memorial.

In one shoe, a handwritten inscription was found bearing the name of a child Amos Steinberg. Amos was born on June 26, 1938. He lived in Prague. On August 10, 1942, together with his parents Ludwig (Ludvík) and Ida, he was imprisoned in the Theresienstadt ghetto near Prague. They were all deported to Auschwitz.

The inscription listed the child’s name and last name, transport designation, and the number under which the child was registered on the transport list (transport Ba 541).

The preserved documents show that the mother and son were deported to Auschwitz in one transport on October 4, 1944. Both were presumably murdered in the gas chamber after selection.

In total, the Germans transported 24 transports of over 46,000 Jews from the Theresienstadt ghetto to Auschwitz. 18,000 of them were placed in a special family camp in section BIIb of the Auschwitz II-Birkenau camp .

In another shoe, documents in Hungarian were found.

“In our collections, we already have shoes with this type of finds, but these are mostly newspapers, which were often used as inserts or as additional insulation. This find is very valuable and interesting because the documents are in good condition. They bear the dates, the names of the people involved, and handwritten signatures. They come from 1941 and 1942, according to Hanna Kubik from the Museum Collections.

These documents belonged to people who probably lived in Munkacz and Budapest.

Some of them are official documents, there is also a fragment of a brochure and a scrap of paper with the name on it. The names of Ackermann, Brávermann, and Beinhorn appear. These people were probably deported to Auschwitz in the spring or summer of 1944 during the extermination of Hungarian Jews. I hope that more detailed research will reveal details about each individual. Recovered documents will be subjected to conservation and, together with the shoe, will go to the Collections – emphasized Kubik.