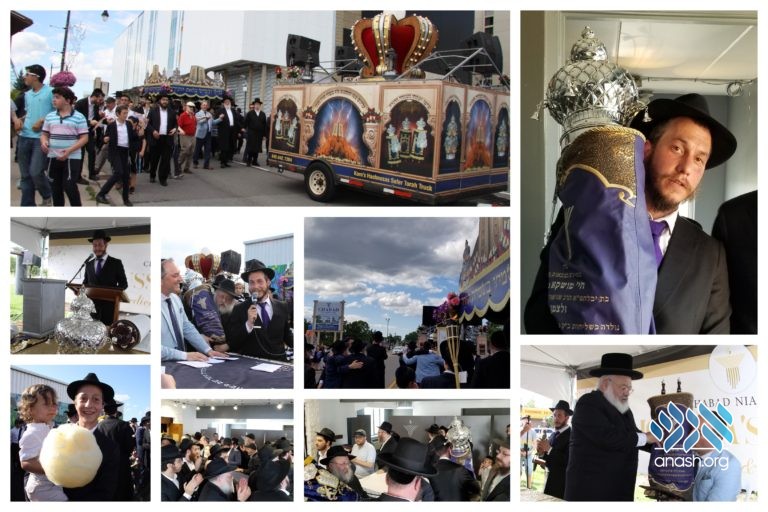 Hundreds of Jews from all across the United States – many of them vacationers that spend time in Niagara Falls and benefit from the Chabad House minyanim and hospitality there, joined in and celebrated the culmination and Hachnosas Sefer Torah of Moussia’s Torah, Sunday, 24 Menachem Av.

Chaya Moussia Zaltzman passed away tragically four years ago on the tenth of Tammuz, 5775/2015, at the young age of six. She is the daughter of the shluchim in Niagara Falls, Ontario, Canada, Rabbi & Mrs. Zalman & Perla Zaltzman. A young shlucha herself, Moussia helped her parents in their shlichus and showed how a young shlucha can also be such a strong influence.

Following the kesivas haOsyos at the property where the new Chabad House will be built, the parade marched down Stanley Avenue to the current Chabad House. Despite the busy season in Niagara Falls and the bust time of day, police allowed for the streets to be closed while the parade marched. The Sefer Torah truck traveled all the way from Monsey, New York and livened up the festivities.

Tears mixed with joy as family and friends remembered a young flower who is always in their hearts. For family and friends who knew Moussia, this was the closing of a circle. Now her memory will be perpetuated by the new Sefer Torah written in her honor. Many thanks go out to Friends of Chabad Niagara as well as Dr. Jason and Evelyne Ohayon of Hamilton, who sponsored the Sefer Torah in Moussia’s memory.

In June of last year, 5778/2018, the Zaltzmans celebrated their eldest son’s Mendel’s Bar Mitzvah. Mid-reading of the Torah, they noticed a letter was missing, rendering the Torah posul, unfit for use. That day a dear friend who was present, Dr. Jason Ohayon, told Rabbi Zaltzman that he’s donating a new Torah for our Shul.

This would be their first Torah.

Four years ago, the Zaltzmans spent Shabbos in Hamilton. Shabbos day they were hosted by their dear friends Dr. Jason and Evelyne Ohayon. What they didn’t know at the time was that this would be Moussia’s last Shabbos meal. Many people remember Moussia that Shabbos, as she was standing out in her purple sequins dress.

On Sunday, 24 Av, the circle was closing. The love of Jason and Evelyne for Moussia will become a gift that keeps giving. She will be part of our Shabbos days again, in a different way. Adorned in a new and different purple dress, the mantel on her Torah.