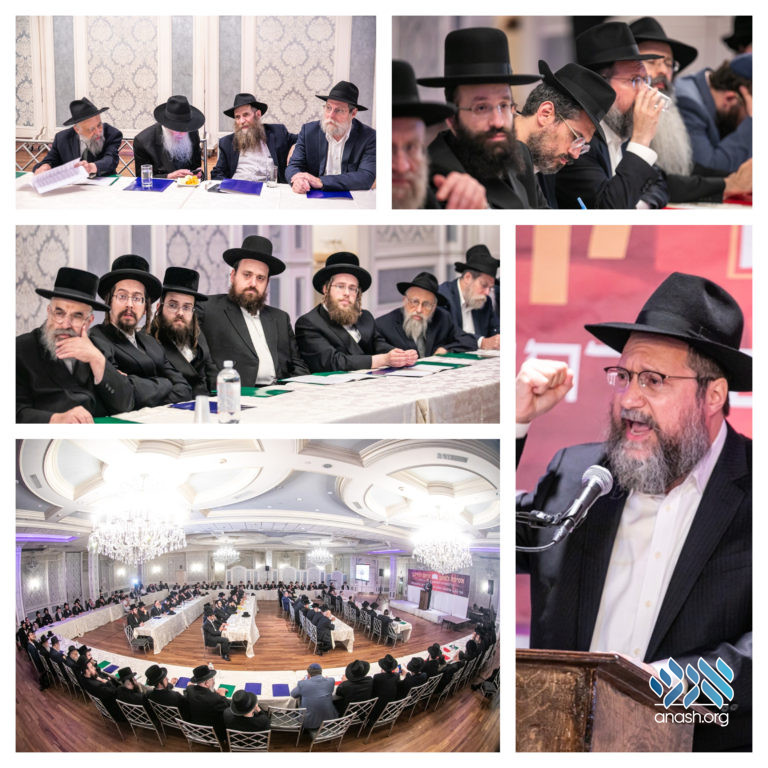 Participants in the meeting of school representatives couldn’t think of a better word. Historic. This was a conference of over two hundred principals and administrators of all Mosdos haTorah in New York State. Institutions for boys and for girls. Every single Orthodox school, across the entire spectrum. Together, they committed to stand together against any changes to the way we educate the next generation. The meeting was called by the PEARLS organization, who has been at the forefront of this battle to save frum, Jewish education in New York State.

The proposed bill that would go into effect this school year (September 1st, 5779/2019) would add many hours a week to the required amount of secular studies taught in all schools, which would strongly curtail the amount of kodesh to be taught in yeshivas and schools, with very little time left to teach limudei kodesh. It would also require the teaching of ideas that are antithetical to Torah values, including foreign religions and alternative lifestyles.

Rabbi Naftali Weiss, principal of Chush and member of PEARLS, began the event by emphasizing how the proposed laws are comparable to decrees in previous centuries: “It is frightening to think that we might have to prep our children before they go to school, to not absorb what they are being taught there.” He stressed that schools and parents must make their voices heard and not rely on the specific organizations – PEARLS, Torah Umesorah and others – to fight the bill.

Mr. Avi Schick, the attorney representing the frum community in the challenge before the courts, provided an overview of how the issue has developed over recent years and where things stand today. He added that the present urgency is for the community to utilize the remaining 40 days for public comment on the regulations to submit as many comments in support of traditional chinuch as possible.

He was followed by Rabbi Moshe David Niederman of the UJO of Williamsburg, who spoke in strong terms about the danger the entire Orthodox community faces, which leaves them no choice but for every single segment of the frum community to put aside any differences they may have and join together to successfully fight and ward off this existential threat.

Rabbi Chaim Dovid Zwiebel, Executive Vice-President of Agudath Israel, followed Rabbi Niederman and was noticeably in pain when he spoke about the danger hovering above our community. He said that the situation needs us to respond in a way of “Mi Lashem Eilai,” that those who care for the education of their children rise to the challenge by using every permissible means necessary.

Rabbi Avi Greenstein of the Boro Park Jewish Community Council rounded out the “official” list of scheduled speakers. His message was short and to the point: Schools could very simply be closed by Education Department and parents could be fined for sending their children to such schools and dragged into family court, if G-d forbid these regulations were to be enacted.

What may have been the highlight of the evening was Rabbi Efraim Mintz, of the Oholei Torah Vaad HaChinuch and director of JLI, delivering the words of the Rebbe Rashab at the famous gathering of all Gedolei Yisroel in Petersburg in 5670/1910 to all those present.

At that meeting, The Rebbe Rashab said that yes, we were sent into galus and will be here until Hashem decrees otherwise, but only our bodies are subjected to galus. Our neshamos never were sent into galus and the nations have no control over our spirits. We must, therefore, continue to have that thousand-year-old mesiras nefesh when it comes to anything related to Torah and Mitzvos and Minhogei Yisroel.

The attendees seemed to be especially energized by the Rebbe Rashab’s words and many asked for copies of the sicha to share with acquaintances. A copy of the sicha is attached below. (It is printed in Sefer Hasichos 5705 pp. 29-30.)

Participants then broke off into groups, sitting down at round tables to share ideas. They concluded the evening rejuvenated and invigorated to stem the impending edict and uphold Yiddishe chinuch until the coming of Moshiach.

Parents! Please, make your voice heard by writing a short letter voicing your opposition to the proposed law!