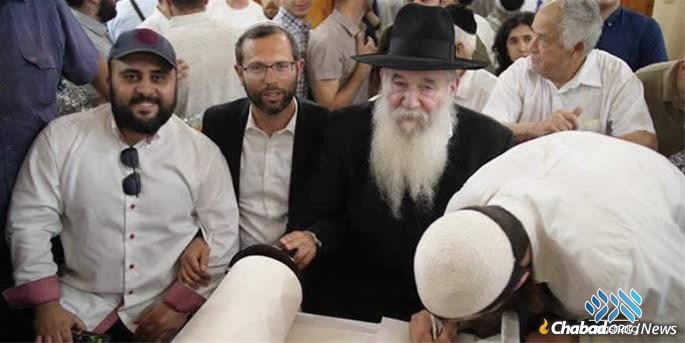 A prominent Chabad-run Moscow Shul, itself a target of 21st-century anti-Semitic hate and destruction, has donated a Sefer Torah to the yeshivah in Tel Aviv that was launched and led by terror victim Rabbi Ahiad Ettinger. The 47-year-old father of 12 was fatally shot on March 17 at a junction near the Ariel settlement, heroically attempting to save others after being severely wounded.

The Bolshoya Bronnaya Synagogue, directed by Chabad-Lubavitch Rabbi Yitzchok Kogan, donated the Torah to the yeshivah, which was established by Ettinger intentionally in an impoverished neighborhood of south Tel Aviv, Neve Sha’anan, where most Jewish residents had moved away from over the past decade.

The Sefer Torah was inaugurated on Sunday night before a crowd of about 2,000 people. Some of the final letters of the scroll were filled in at Ettinger’s home by his children before the celebration moved to the neighborhood of the yeshivah for speeches, dancing and music.

“We felt that this was the right thing to do,” Rabbi Avi Tcidon of Jerusalem, who worked with Kogan to help spearhead and organize the event, told Chabad.org. “To help fix the world after the loss of any one Jew with a new Torah scroll, and to come to the family and give honor to the victim, and ultimately, to all of am Yisrael [‘the nation of Israel’]. The whole idea is ahavat Yisrael [‘love of one’s fellow Jew’].”

Students of the yeshivah and other local yeshivahs, mothers, children and dignitaries, including Speaker of the Knesset and well-known refusenik Yuli Edelstein; Israel’s Minister of the Economy and Industry Eli Kohen; Jerusalem Affairs Minister Ze’ev Elkin; and Kogan were among the attendees. “It was very impressive, a big Kiddush Hashem,” said Tcidon.

Ettinger, a resident of the settlement of Eli for the three years before his murder, established the Oz v’Emunah Yeshivah in an effort to bring Yiddishkeit back to life in the rundown neighborhood and provide an oasis for any remaining Jews and his students.

“He Wanted to Create an Anchor for Jews“

Students and others involved in the yeshivah’s founding are doing their best to keep the institution running in Ettinger’s absence, despite the pain of his loss.

One of the people Ettinger recruited to help establish the yeshivah is Tel Aviv Municipal Council representative Chaim Goren, who recently told reporters: “Rabbi Ettinger took a deserted Shul near the old Central Bus Station and revived it. He collected shekel after shekel with great dedication in order to pay for the renovations and to find students and teachers.”

He said Ettinger functioned as director, head of the yeshivah and secretary. “He wanted to create an anchor that would keep the last few Jews who lived in the area from leaving.”

Ettinger was shot as he drove by the junction where terrorist Omar Abu Laila, 19, was shooting at passing cars after killing Israel Defense Forces’ soldier Gal Geidan with the soldier’s gun after wrestling it from him.

Relatives reported that Ettinger, despite having been shot and bleeding profusely, turned his car around and fired four bullets in the direction of the attacker, who managed to escape in a vehicle abandoned by a fleeing driver. The terrorist was tracked down and killed within 48 hours by Israeli security forces.

The tragedy caught the attention of Kogan and the Moscow community he serves, which led to the decision to dedicate a Torah scroll to the yeshivah, said Tcidon, a longtime friend of Kogan who operates a Torah center for Russian immigrants in Jerusalem.

The storied past of Kogan’s Moscow synagogue, which dates back to the late 1880s, includes a failed bomb attack in 1999. In 2006, it was attacked by a white supremacist who stabbed nine people as he shouted: “I will kill Jews” and “Heil Hitler.” Kogan jumped on the perpetrator, and his son Yosef, 18 at the time, wrestled him to the ground. Kogan held the assailant until police detained him. Its history also includes the Stalin-era 1937 arrest and execution of its leader, Chazzan Moshe Chaim Gurtenberg.

Kogan, who took over administration and directorship of the synagogue after Soviet authorities returned the structure in 1991, was himself a renowned refusenik and pillar of Jewish life in 1980s’ Leningrad, today St. Petersburg, earning the moniker of the “Tzaddikof Leningrad.” He and his family were finally granted permission to leave the Soviet Union in 1986, only to be sent back to Russia a few years later as a Chabad-Lubavitch emissary by the Rebbe, Rabbi Menachem M. Schneerson, of righteous memory. Ever since, he has become known for generously extending himself to meet the needs of his constituents and Jews the world over.

In a past interview with Jewish Educational Media, he spoke of the profound influence that the Rebbe had on his commitment to Jews globally.

“From a young age, my mother would tell me about the Lubavitcher Rebbe,” shared Kogan. “She didn’t call him the Lubavitcher Rebbe. She simply said: There’s a Rebbe who cares about every Jew in the world. To me, it sounded like a fairytale. How could one Jew be tuned into the entire world? Still, a mother’s word becomes engraved in your heart and soul.”

Kogan holds the Machzor of the Shul’s former leader, Chazzan Moshe Chaim Gurtenberg, who was arrested and executed by Soviet authorities in 1937.