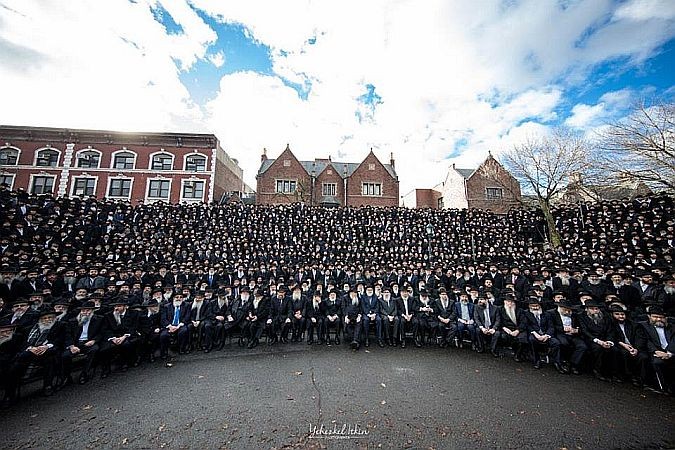 Approximately 5,000 Lubavitch shluchim live around the world spreading the light of Judaism to thirsty souls. All were either sent directly by the Lubavitcher Rebbe or – after his passing – took on the mission inspired by his vision.

In advance of the 25th yahrzeit of the Rebbe (which falls out on Shabbos, the 3rd of Tammuz), The Jewish Press spoke to two of the earliest Lubavitch shluchos – Mrs. Reizel Raskin and Mrs. Bassie Garelik – who live in Casablanca, Morocco, and Milano, Italy, respectively.

When did you arrive in Morocco?

How did you wind up there?

Before my husband and I became chassan and kallah, the Rebbe asked if we were willing to go to Morocco. My husband replied, “Hineinei, I’m ready.” My response was the same.

Was it difficult to move so far away? In 1960, international phone calls were expensive and, of course, there was no e-mail or Skype.

If the Rebbe said to go, what was there to think about? We were soldiers of the Rebbe. Making telephone calls was very rare in those days and certainly wasn’t in our budget. We wrote letters. My husbands’ parents lived in Israel, and at that time you couldn’t even send a direct letter from Morocco to Israel [because of Muslim hostility toward Israel]. We had to send the letter either to New York or to my parents in Paris, and they would forward it to Israel.

I remember back then we had to milk cows and boil the milk [to pasteurize it]. It’s not like today that you could just buy milk in a store.

How many Jews were in Morocco when you arrived?

Approximately 150,000. Now there are only 2,000 [due to a mass migration of Jews from Morocco to Israel and elsewhere over the years].

With your husband having passed away 15 years ago and with so few Jews left in the country, why do you remain?

My heart does not permit me to leave a place the Rebbe sent us to.

Is it true that the Moroccan king – Hassan II, who ruled from 1961-1999 – was very supportive of your work in Morocco?

He was very happy because it gave him a good name – that Jews are able to live without any obstacles. Of course there were times when we had to be very careful, but we survived it. We knew the Rebbe was watching over us, so we had nothing to fear.

Can you share a story from your six decades of shlichus?

We ran several schools, and in 1971, my husband arranged a trip for some of the teachers to come to New York to see the Rebbe. My husband wrote to the Rebbe, and the Rebbe responded that [due to the political situation in Morocco], it’s better not to come.

The trip was supposed to be on Shiva Asar B’Tammuz. That year the fast fell on Shabbos, so it was pushed off to Sunday. On Friday, we got a message from the Rebbe’s office that Lubavitchers all around the world should hold farbrengens on Shabbos. Later that day, a shliach in London called us and told us the Rebbe wanted to know if we got the message.

That Shabbos, after davening, someone ran into shul and said, “They just killed the king!” Everyone knew that meant we were in danger because the king was known as the protector of the Jews. People actually shouted, “Kill the Jews!” in the street that day. My husband, though, told everyone, “I promise you nothing is going to happen because there’s a tzadik in New York and he knew what’s going to happen and he told us to farbreng today and specially called to make sure we got the message.”

We later learned that the king survived the assassination attempt and ordered the arrest of everyone who tried leaving the country over the next few days. It was that Sunday morning that the group of teachers were supposed to leave to New York. They would have all been arrested had the Rebbe not told us to cancel the trip.

When did you go to Italy?

How did you wind up there?

As a kallah, I had written to the Rebbe that he should send us wherever he wants. One day I was in Pittsburgh visiting my parents, and my husband called and said, “By the way, Rabbi Hadokov, head of the Rebbe’s secretariat, called and said if you’re interested in knowing where you’re going, it’s Italy.” I didn’t even know there were Jews in Italy.

Was it normal back then for a Lubavitch girl to write to the Rebbe, “I’ll live wherever you want me to”?

Truthfully, my husband wasn’t crazy about going because he grew up in Russia and, until he was 10 years old, he never saw another chassid other than his father. He later came to New York to be with the Rebbe and didn’t want to leave. When he proposed to me, he asked where I wanted to live. He thought I would say Pittsburgh; that was already too far for him.

How many Jews lived in Italy when you arrived?

What kind of shlichus work did you do in Italy?

Rabbi Hadakov told me to open a school so that one day my students would become my collaborators. I remember thinking, “I have to wait a lifetime for that.” I was so young. I turned 20 in Milano. When I used to hear the word “Rebbetzin,” I would turn around to see whom they were talking to.

I started with a kindergarten in my living room. That wasn’t a problem. The problem was when I tried to start a first grade. Many of the Jews in Italy were Holocaust survivors who [didn’t want to send their kids to a Jewish school].

I once wrote to the Rebbe that I feel like my neshama was sent down to this world just to knock on people’s doors and hear them say, “No.” But things changed over time. Today you have three Jewish schools, kosher restaurants, kosher stores, etc. It’s much more vibrant and it’s normal now to send your child to a Jewish school.

What kind of Jews live in Italy?

You can learn history through the Jewish community of Italy. When Abdul Nasser ruled Egypt, there was a big immigration of Jews from Egypt to Italy. When the Shah of Iran fell, there was a tremendous influx of Persian Jews. When Kaddafi was in power, Jews from Tripoli, Libya, came to Italy. And, of course, there are native Italian Jews and European refugees who came to Italy after the Holocaust.

In the beginning, there was a big difference between each group, and they didn’t mix much. Today, it’s much more amalgamated.

What’s the difference between your shlichus now and then?

People didn’t know what to expect then. I remember when we arrived in Italy, we bought two big tables and 50 chairs [to host various Jewish gatherings in our house]. People thought we were nuts. Why does this young couple need 50 chairs in their house? The [Holocaust refugees] didn’t think they could live in Italy like they lived in the shtetl. We were there to prove to them that they could.

Today, Jewish life in Italy is a different world. When we came to Milano, for example, there were two women who were sheitels. Today, kein ayin hara, there are a hundred times that amount.

The Legacy of the Lubavitcher Rebbe

Year the first shliach went out: 1950 – to Casablanca, Morocco

Year the last shliach went out: 2019. Two recent ones went to Purdue University and Takayama, Japan.

Number of Chabad on Campuses: 284

Number of shluchim who went out before the Rebbe’s passing: 1,207

Number of shluchim who went out after his passing: 3,739

Number of children who will attend a Chabad House camp this summer: 60,000 in North America.