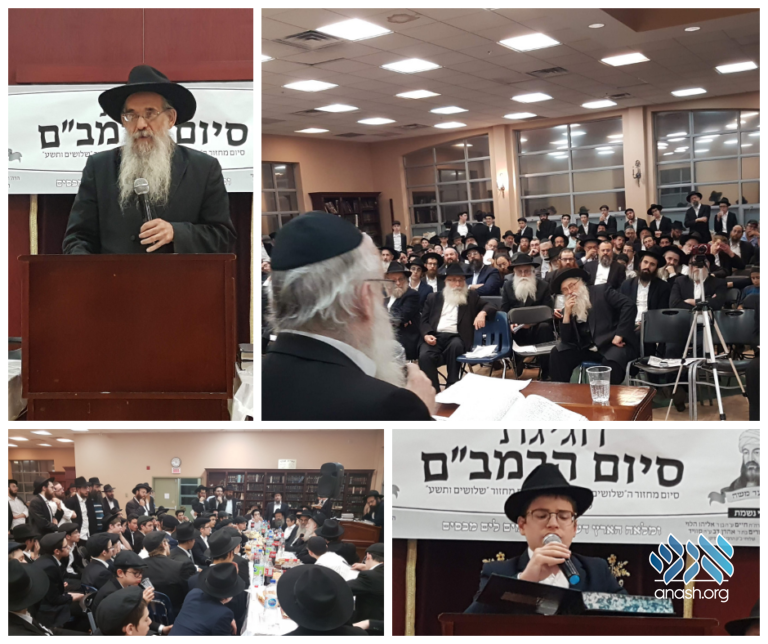 On Monday, 4 Menachem Av the Montreal community celebrated the Siyum Harambam. The siyum, held in Tomchei Temimim Yeshivah hall, was attended by hundreds of anash and temimim as well as residents of the city.

The final halachos of the 38th cycle were completed by the Rav Berel Bell, rov of Beis Medrash Lubavitch and a member of the Montreal Vaad HoRabonim. Rav Aryeh Leib Kaplan, Rosh Yeshiva of Tomchei Tmimim, began the study of the 39th cycle.

A siyum on masechta bava kama was made by a bochur from Estonia, Yaakov Kot of the Moscow Mesivta. The Mesivta is spending the summer in a Yeshivas Kayitz setting in Montreal.

The guest speaker was Rav Yechiel Kalmensohn, rosh yeshivah of Tomchei Tmimim in Brunoy, France. He delivered a beautiful Shiur in Hebrew for the benefit of the Moscow bochurim.

He was followed by Chief Rabbi of the Montreal Vaad, Rav Yonoson Benyamin Weiss.

After the official event, a Farbrengen was held with the guest of honor. He Farbrenged with the students of the Moscow Yeshiva and anash, and continued until the wee hours of the morning.