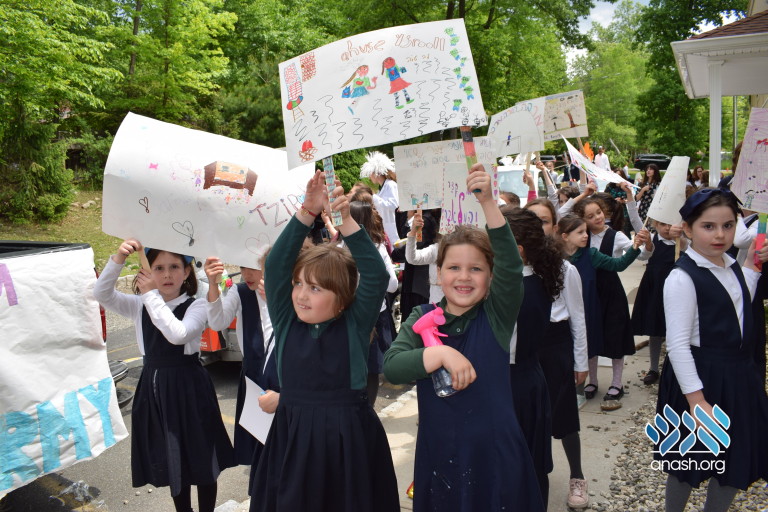 Cheder Chabad of Monsey Girls’ and Preschool divisions had their very own parade on Lag Baomer. Now a steadfast tradition, the kids have their own parade around the large school grounds, marching with signs and floats all made by the students themselves.

This year’s theme for the signs was Pirkei Avos, and all signs quoted mishnayos from Pirkei Avos.

The day started with a rally led by shliach Rabbi Yossel Gluckowsky, a cheder parent. The kinderlach were very excited to have their own outdoor rally, and the pesukim could be heard all the way down South Monsey Road. That was followed by the exciting BMX Bike Show, and the kids were amazed and wowed by the exciting stunts and tricks. They even got a parent from the crowd to volunteer and lay down on the path so that the bikes could jump over him.

The highlight of the day soon followed. The kids marched all the way around the large cheder property, with their own homemade signs raised high and proud. The older grades made their very own floats, mounted on pickups, and they drove around, much to their and the kids’ delight.

After the parade the kids all enjoyed popcorn and cotton candy.

The Pre-1A boys marching band, led by parent Moshe Sobol, all playing their very own drums, were a major hit!

Boruch Hashem, the ominous clouds were patient, and the rain did not come until all the outdoor festivities were over with.

A huge yasher koach to all the sponsors, who are too many to mention, to the teachers and principals, and to the kinderlach who worked so hard and behaved so well throughout the program!