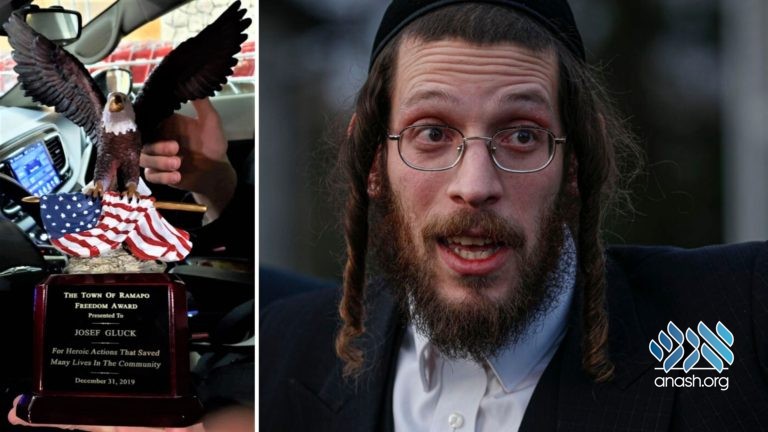 Yosef Elya Gluck, who charged the suspect during the attack in Monsey on Motzoei Shabbos Chanukah, was honored by local officials for his act of heroism. Gluck was awarded the Ramapo Freedom Award, an honor created by the town in 2001 to commemorate the victims of 9/11, WNBC reported

Yosef Elya threw a coffee table at the suspect as he attacked people gathered for hadlakas neiros at the home of Harav Chaim Leibush Rottenberg, shlita, the Kossoner Rebbe of Forshay. Ramapo Supervisor Michael Specht said that he moved a young victim out of the way, and then helped lure the attacker out of the house.

“He set himself up as a target to deter him from attacking other people in the room,” Spect said.

With the presence of mind to get the suspect’s license plate number as he fled from the home, Gluck provided police with a description of his car and license plate, and Grafton Thomas, the alleged attacker, was caught two hours in Manhattan.

“I think Joseph is a very modest person,” Specht said. “He is someone who doesn’t seek the spotlight, but he is somebody who found the right time and the right place to act heroically.”